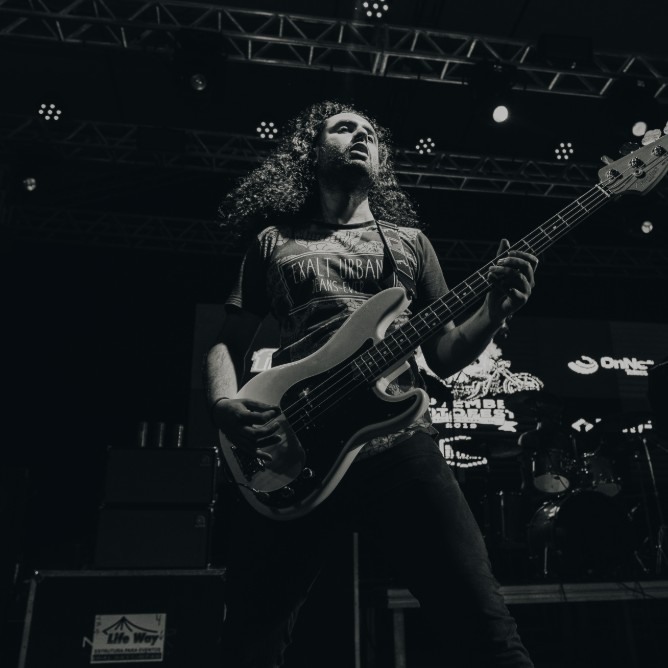 Bassists often don’t get the credit they deserve. They’re rarely ever the frontman/ woman however they are the lifeblood of the band and are responsible for setting and keeping the groove. We’ve compiled a list of some of the best bass-centric bands and artists to inspire you.

We wouldn’t be able to do an article like this without mentioning Royal Blood. The 2-piece rock band from Brighton have made a name for themselves in the past couple of years and have done so with just a bassist and a drummer, quite a rare feat! Anyone who has heard Royal Blood would agree that they combine the sound of a bass guitar and a normal guitar all from the same instrument.

This is all because of a very clever rig set up; the bass guitar is channeled through a set up of bass AND guitar amps in order to produce the heavy but unique sound. Mike, the vocalist and bassist, uses one tube bass amp, a tube bass emulator and a guitar combo. The bass amps were chosen to produce the overdriven, distorted sound that couldn’t be achieved using just pedals and the guitar combo helps bring out the body of the sound. Of course, it’s not just amps that create this sound, but Mike is very secretive of his pedal setup. Some things are best left a mystery.

Miles Mosley isn’t your traditional bassist. L.A. born Miles is an upright bass player, known for recording, producing and touring with some of the biggest stars past and present such as Mos Def, Kendrick Lamar, Terrance Howard, and even Avenged Sevenfold. Commonly referred to as the ‘Jimi Hendrix of the upright bass.’ Watch any number of his live performances and be prepared to be blown away by his incredible skill and showmanship.

Miles plugs his upright bass into an amp and a pedal board setup which only goes to further improve his performance. The pedalboard features a huge array of effects such as two MXR boost line drivers (one constantly on and the other just for solo’s), two octavers, a Moog MF drive, a wah pedal, Echo-puss delay and much more. If you want to hear a full break down, watch the man himself explain his set up here.  He is also a founding member and player of the acclaimed Los Angeles based group West Coast Get Down which features other popular jazz and bass acts such as Thundercat.

Where do we even begin? John Entwistle, if you don’t know already, was the bass player for the legendary The Who and is responsible for some of the most iconic basslines ever. Performing alongside greats like Pete Townshend and Keith Moon could make it hard to stand out, especially in an era where the basslines were more focused on just keeping a groove. Not for John, his infectious playing and unique techniques allowed his bass riffs to cut through. Voted as the ‘best bassist of all time’ by Rolling Stone magazine, it’s no surprise to see why. John’s melodic riffs sometimes became more of a focal point than Pete’s guitar playing. Take ‘The Seeker’ for instance. John’s rather complicated melody is complimented by Pete’s playing of relatively simple chords. Let’s not forget that his solo in ‘My Generation’ is probably one of the most famous bass solos in all of rock history.

Larry Graham is  best known for his involvement with psychedelic soul/funk band Sly & the Family Stone, as well as supposedly creating the infamous slap bass technique. Destined to work in music from a very young age, Larry started to learn piano at 5 and drums soon after. Next up was guitar at age 11 and  Larry  releasing his first record at thirteen. At 15, he joined his Mothers band ‘The Dell Graham Trio’, and it was when the drummer left that Larry found that he was missing the percussive groove that came with the drums so the slapping technique was invented.

Joining Sly & the Family Stone, Larry’s bass playing was performed to the masses. It was the first-time many people had seen the bass be played in his unique way. Whilst with the band, they released classics such as ‘Dance to the Music’ and ‘Everybody is a Star.’ In 1993 he was inducted into the Rock and Roll Hall of Fame as a member of Sly & the Family Stone.

Check out the video here in which he explains the origins of the slapping technique in more detail.

One of five brothers, Victor is often referred to as the greatest bass player alive at this moment. Having started learning music at the age of 2, it wasn’t long until he was performing with his family band at age 5, even opening shows for Curtis Mayfield at age 6!

Having been on the scene since 1990 as a founding member of Bela Fleck, Victor is showing no signs of slowing down and is now a multi grammy winning artist. He has released solo albums featuring nothing but his 4-string bass and himself, something relatively rare however these albums were met with open arms and critical acclaim, with his first studio album referred to as the ‘most important bass record of all time.’

With a talent like Victors, it’s no surprise that fans and fellow bass players from around the world were dying to learn his techniques, following him to music shop seminars and talks around the world. It was off the back of these that his acclaimed Victor Wooten’s Centre for Music and Nature was formed, now having taught thousands of students from all walks of life.

The bass is such a versatile instrument and it should not be underestimated. The examples we’ve shown you go to prove that a bass can contribute equally to a song’s rhythm and melody, and is equally as adept at taking centre stage as any other instrument. Keep grooving!

If you're looking for some more examples check out our very own 'Cut Through Bassists' playlist below.

Did someone say roadtrip
It's time to go on tour, but where do you start the planning and packing?
Too Afraid to take to the stage
How to stop stage fright from holding you back
Get your groove back
Struggling to get creative? Here's our top tips for overcoming writers block
Is the guitar riff dead?
We delve into what goes into some of our favourite riffs of all time and if there’s still a place for riffs in today’s tunes.
Thinking Outside the Band
Guitar + drums + bass = a band… right? Well we’ve taken a look at other instruments to propel your next track to new heights.
The alternative inspirations
We take a look at 6 guitar heroes from outside the world of rock, and share their techniques that you can learn from today.
The role of today's drummer
2019 marks 100 years since the advent of the contemporary drum kit, so we ask how drummers have evolved and what's expected today.
The evolution of the bassist
Usually underrated, often overlooked, but forever essential, we look at what’s expected from today’s bass players.
Out in front. The voice of the band.
It's down to the singer to elevate your songs, so we’ve taken a look at the key characteristics every lead singer needs.