A sound that is synonymous with the rock revolution and at the heart of electric guitar. We look into the history and beginnings of distortion and how it became a staple sound in modern music.

Firstly, to understand distortion we need to look at what’s happening sonically. Distortion is when something is changed, twisted or exaggerated to make something appear differently, thus musical distortion is the sound of an amplified instrument that is significantly altered, creating a fuzzy, overpowered sound after the original signal has been pushed to its limit.

The origins of distortion in guitar music are varied, with a lot of different claims around the first documented use. It’s widely accepted that the first uses of slight distortion were from the first guitar amplifiers available being pushed to their limits. Blues artists such as Elmore James, Buddy Guy tried to match the raw power of their vocal performances with similar styles when playing, and in the early 50’s the sound could be heard on tracks like ‘Maybellene’ by Chuck Berry - see below. Guitarist Link Wray also began to modify the valves in his amplifier and poke holes into the speaker cone to get similar sounds.

In 1961 Country artist Marty Robbins had a track called ‘Don’t Worry’. During recording of the track the bassist was plugged directly into the mixing desk, however there was a problem with the channel which caused it to distort and create an intense, distorted fuzz effect. There are similar stories of experimentation with distorted sounds, and in 1964 Ray Davies of The Kinks supposedly took a knitting needle or razorblade to the speaker cone and cut it to get that distorted sound!

As the years went on, pedals started to appear on the scene that replicated that overdriven, distorted sound. It was at this time that the history of Marshall amps was being written and our amplifiers found their way into the hands of legends such as Pete Townshend, Jimi Hendrix and Eric Clapton.

Due to the use of ECC83 valves in the earliest models and a capacitor/resistor filter after the volume control, Marshall amplifiers began to ‘break up’ sooner, making it the dream amplifier for those chasing distorted sounds. The late 60’s and early 70’s saw the overdriven guitar sound hit the mainstream and later a more aggressive variant that we now refer to as distortion appeared in heavy metal music. Changing demands and tastes led players to want more and more distortion over the rest of the 20th century. As the times changed, so did our amplifiers, and we introduced 100-Watt heads and EL34 power valves. This kept Marshall at the forefront of rock music and our amps became a household name for anyone who wanted to turn it up loud.

Fast forward to now and there is a huge landscape of variation when using the term ‘distortion’. From transparent overdrive pedals that replicate an amplifier on the edge of breakup, to heavy metal distortions and fuzz pedals. 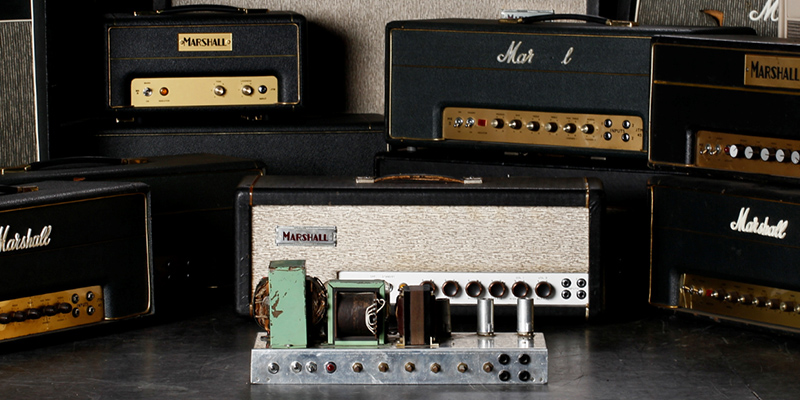 Reverb Types
Reverb, how does it work, what are the different types and how is it used in guitar playing? We take a look at in this article.
What Marshall is right for me?
With over 50 years of amp heritage, we've developed all kinds of amps, so how do you know which is the right one for you?
What amp type is right for me?
It's easy to get overwhelmed when it comes to amps. Here's some tips for when you're deciding your ‘forever amp’.
Setting up your pedalboard
Pedalboards can open up a world of effects. We talk through some essential points to consider when setting up your board.
Recording your guitar
Whether at home, in the studio or your practice space, we show you ways to get your guitar sounding great.
Cutting the Cord: Wired or Wireless?
Can modern day wireless rigs retire the wire? We take a look at the pros and cons to help you decide which is right for you.