A DAY IN THE LIFE OF GREENIE

How did you get into being a session musician?

I got into session playing after a band I was the drummer for called ‘Detroit Social Club’ broke up. We had a record deal with a major label, released an album and did the touring/festival circuit worldwide for 3 years. Things didn’t work out for us in the end and the band was dropped by the record company pretty suddenly. It was one of those situations where you have to go back to the drawing board and think what the next step or is there even a next step? Just as I was about to start looking for a mediocre job I was approached by 3 different artists at the same time who had seen me with Detroit Social Club, really liked my playing and asked if I would record or tour with them. That was 8 years ago and the work has kept coming in ever since.

If it’s a studio session day I will have a listen to what tracks I am working on that day and write any notes/charts etc. I spend the rest of the day recording and usually just eat and sleep once I am finished.

A touring day will again usually start with a run and meditation, then if there’s time for a visit to a local gallery, cafe, museum or something cultured I do that before soundcheck. After soundcheck, I have a few hours to grab some food or go for a meal, get back to the venue and warm-up for 45 minutes on a practice pad, do stretches, play the show then hotel to relax and sleep or hang out with any friends that might be at a show.

If it is a day at home I always try to do at least 2 hours of drum practice and come up with ideas for say a new drum video or general drum-type projects I can work on. I also teach drums when I am not touring so days can be filled with lessons and lesson planning. 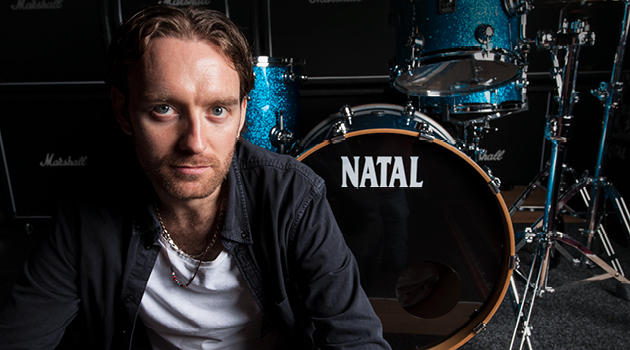 Which artists have you worked with?

I have played drums for VANT, Little Comets, Smoove and Turrell, Y.O.U, Andy Taylor from Duran Duran and Katie Waissel from UK X Factor. I have also played on sessions with artists like Ricky Warwick from ‘Thin Lizzy’/‘Black Star Riders’ and co-wrote music with artists like Tommy Henriksen who plays guitar for ‘Alice Cooper’. Other sessions have included working as session drummer and engineer on an independent movie soundtrack and working as a Musical Director and session drummer on a sync library project and Sony Music. At the minute I am working with a few producers as their go-to drummer, so whatever artists they are producing I get asked to play drums on. This can be great in the sense of playing different genres and constantly networking with new talent.

What’s the most memorable recording session you’ve had so far in your career and why?

I first got the session drummer job with Andy Taylor back in 2011 and spent an intense few months that year recording for him in his studio in Ibiza on so many different projects and different styles of music, literally hundreds of songs. It was a seriously great learning curve as he kind of took me under his wing. By the end of the sessions, I was a completely different drummer and was really ready to enter the session world professionally and confidently. He put me through the same meticulous recording and playing process that he had been schooled on when he worked with the likes of Nile Rodgers, Robert Palmer and Duran Duran. It was priceless knowledge.

What about a memorable live show?

One that really sticks out in my mind is playing Fuji Rocks Festival in Japan with VANT in 2016. We got spotted playing Great Escape Festival in Brighton two to three months before the festival in Japan was to take place. We ended up playing the second biggest stage to around 10,000 people on a sunny Saturday afternoon. It completely took us by surprise when we walked onstage and the response was incredible. The crowd sounded like a giant loud hairdryer, it was just a really cool experience playing for those 40 minutes in such an amazing setting with that kind of crowd. Those situations really make the hard work behind the scenes and long hours travelling worthwhile.

How do you prepare for touring and studio work?

For studio sessions or tours I try to get tracks from the artist or producer as soon as possible so I can spend quality time learning the structures and parts until they are as perfect as can be. I usually spend a few days at home on the electronic kit just working out the parts and getting them in the right place. Then I take it to a rehearsal room to work on the full kit for a few days before recording in the studio, or if it’s a tour before band rehearsals.

One curveball in recording sessions is sometimes you don’t receive the tracks your working on till right near the session or don’t get to hear the tracks until it’s time to record, so being focused, ready to listen, ready to react and in the zone is vital.

Is it hard to adapt your drumming style to different artists or genres?

At times for sure. I can be completely out of my comfort zone in the studio or on tour sometimes but what I have learned in that situation is, if you keep your eyes and ears open to the people around you, what they are saying and what they are playing and be confident in your own abilities then it can be easier. You have been asked to be in the session or on that tour by the artist or producer because of your talent so don’t be worried if it’s a little daunting at times.

For me these challenges are always invitations to learn new skills which add to your musical arsenal forever, it’s a good way to put a positive spin on a scary situation.

How do you find work?

Mainly through word of mouth and having a strong consistent social media presence. I keep my ear to the ground of what is new music-wise, which new musicians or songwriters are on the scene and try to network and spread myself out as much as possible in the real world face to face.

Practice playing as much as possible, take it seriously, take yourself out of your comfort zone often, treat every day as a school day, keep up with new gear and new technology. Be a cool person to be around. People buy into your personality sometimes just as much as your talent. One quote that I was told very early on in my drumming career about touring was, “It’s not just the 2 hours your onstage that matter, it’s the 22 hours your off stage also!!” It's 100% true.