We talk music production and Judas Priest with the legendary producer. Sound engineer, producer, guitarist and all round legend, Andy Sneap, recently dropped by Marshall HQ. While he was waiting to get his amp serviced, we decided to ask him all about life in the music industry. Here's what he had to say.

How would you describe your job to someone outside the music industry?

I always draw a parallel to film directing in a way. You’re there to steer the ship. You’re given the responsibility of a budget and delivering a product on time. You’re the guy that the label entrusts all that to. You’re the guy that oversees everything. Really each album is different and each band is different, you have to assess the situation when they come in and you see if they need help with the songwriting, or whether there are certain players that need steering a certain way or the strengths within a band. And also as far as the songwriting goes, you need to see where the strengths are and whether there are any weaknesses in the songs or the arrangements. 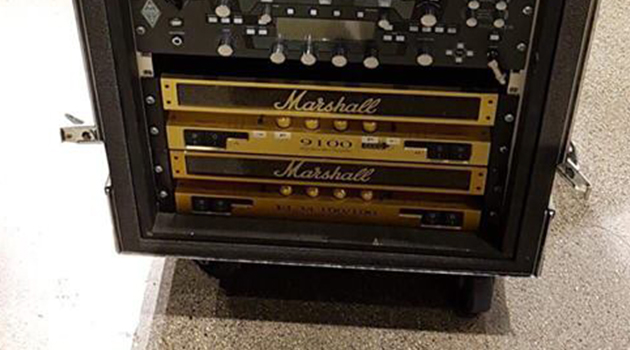 I usually try to get in the studio for about 10 o’clock. I like to get in there quite early. Usually there’s some editing or some setting up to do. Then starting the band by midday and then whatever we’re doing. If it’s vocals I’ll sort of flip-flop it with guitars because you can’t get a singer singing all day. So you’ll start off with guitars a little bit and get two or three good hours out of the singer. It all depends on what you’re doing really. If it’s drums, trying to get some drums down with two or three good takes. Strong song takes. Get the editing done, then get try and get the guitars done later on. I try and disperse it with one or two things during the day because it stops me getting bored as well!

How did you become a music producer?

I left school at 15 with no qualifications whatsoever and I was determined to be a guitar player. I started playing the guitar when I was 12. I signed my first record contract by the time I was 18 and it was later on in that year—well I had to wait until I was 18 to sign the contract—then later on that year I was in Germany recording, doing my first album. I did three albums as a guitar player before I got into production. When the band folded, this was my first band Sabbat, when that folded in the early 90's I got into doing a lot of live sound and studio work. I had a little studio set up at the rehearsal room so I was doing demos with the bands and demos for myself and I was doing a lot of live work around Nottingham. Then I started doing a few tours. I got involved with a bigger studio in Nottingham. Then I started working with the big producers who were coming through that studio. One of those was Colin Richardson who did Machine Head, Fear Factory and Napalm Death. I ended up working in LA and San Francisco with Colin. That would have been the end of '96. And I just made a lot of contacts there. From there I just kept going up really and I didn’t look back and because I was doing albums that were on time and within budget and people liking the sound of, it just kept going.

Which artists have you worked with over the years?

Some of the bigger ones are probably Testament, Accept, Saxon, Megadeth, Judas Priest, Killswitch Engage. I did some of the other Roadrunner acts like Machine Head, Trivium. Loads really. Exodus, Arch Enemy. Most of the bands that were coming through 10-15 years ago I was getting involved with and I’m doing a bit more of the classic bands now.

What’s the most memorable moment of your career so far?

Not one that I’m going to tell you! Probably getting the [Judas] Priest gig really. Priest were one of my favourite bands when I was a kid growing up and getting involved with them and doing their album has just been great. Obviously getting a top five album in the States with them, top five in the UK as well—it’s a bit of a career highlight.

How did that gig come about?

That’s was actually through Mille from the band Kreator, Mille Petrozza. He was at a dinner at the Frankfurt Music Fair probably two or three years ago now for ESP guitars and he was sat with Glenn the guitarist from Judas Priest. They were talking about the next Judas Priest record and Mille said “you should use Andy, he’s a massive fan, he’s English, he’d be the right man for you”. Mille then ran off to the toilet, called me from the toilet all excited saying “Andy, Andy, you need to talk to Judas Priest”. So I phoned their management up the next week and said “I understand you’ve been talking about me, if you want to have a meeting let’s do this”. I met up with the guys a week later and we got the ball rolling.

You’re currently touring with Judas Priest filling in for Glenn, what has it been like being on the road again?

It’s great playing with them now. I’ve done things on a certain level. I’ve done some fairly big tours in the past where we’ve had decent catering and decent buses and stuff but nothing to this size. To be on a level this professional now is amazing. And it’s not, compared to other tours I’ve done, hard work really because everything’s done for you. I literally turn up in the evening, we have an hour’s warm up and then we go on stage and play. It’s not a day’s work, is it? It’s great! The whole organisation is brilliant.

Where do you think your career is going to take you next?

Oslo on Monday! But besides that, production wise I don’t know. I was saying to my girlfriend the other day that I’ve got to where I wanted really doing the Priest record so unless something really big comes along I don’t really know what I want to do. Because my heart was set on being a guitarist when I started I’m just going to focus on this for a little while to be honest and just get back into playing for a year. It’ll probably recharge the batteries for the studio. This isn’t going to last forever. I’m just sort of standing in with the Priest thing. It’s a nice change to be able to do something as professional as what I’m doing on the production side of things. It’ll give me a bit of time off because really the last 20 years for me have been stuck in a studio with my head between a pair of speakers! It’s nice to do a different side of it.

What advice would you give to people interested in becoming a music producer?

Don’t try and copy people. There’s a lot of people that try and get info out of me, get settings that I use, samples that I use and profiles that I’ve made. Really you should just try to do your own thing because if I gave someone all my settings, it still isn’t going to be the same because they can’t hear what I’ve got going on in my head. You’ve got to follow your instincts. I think if you’re just getting into it, rather than going and spending a fortune doing these college and university courses that are advertised everywhere now, I always say get a laptop, get a little portable rig and go and offer your services round rehearsal rooms. Get some actual grassroots experience, get used to dealing with musicians because one thing that was really good for me when I started out was the fact that I’d been a musician. I’d done Radio 1 sessions, I’d done three albums as a guitar player so I knew what it was like in the studio and the way people work. It really counted for a lot, that rapport, when you’re in the studio. I always say it’s the being on the other side of the glass, you’re not this stranger that comes in, you’re having a laugh with the band but you’re being responsible as well and getting the work done.

Behind the music with Leander Gloversmith - Artist Manager
Managing Architects, Lower than Atlantis and Neck Deep over 15+ years has taught Leander a lot. We got the story so far.
Behind the music with Christian Wright - Mastering Engineer
With 20 years at Abbey Road, Christian knows what it takes to make your mark in music. We asked him to share his story.
Behind the music with Steve Ager - Radio Plugger
Responsible for putting Nirvana's 'Nevermind' on the radio for the first time, Steve takes us through his role of getting music onto the airwaves.
Behind the music with Romesh Dodangoda - Engineer / Producer
We get to sit down with one of the biggest rock producers and mixing engineers and find out how he got to where he is.
Behind the music with Donnay Clancy - PR Publicist
It's all performances and parties right?! We get some time to ask Donnay what it's like being Head of Press for the Noise Cartel.