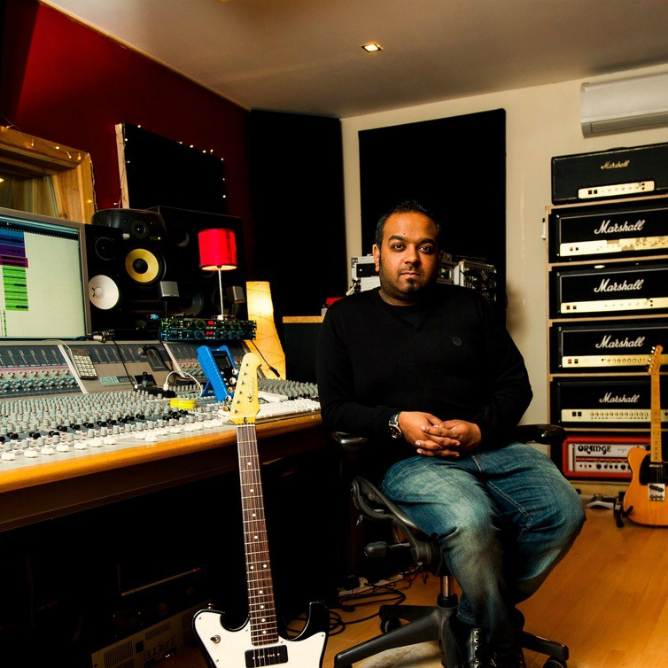 Meet the man responsible for the sound of some of your favourite records. Romesh Dodangoda is a Producer/ Mixing Engineer who has worked on some of the best rock and metal records to have ever graced our ears. He’s worked with bands such as Bring Me the Horizon, Motorhead, Funeral for a Friend and Kids in Glass Houses and we wanted to find out how you can get started working in such a fast-paced and creative role.

How would you describe the role of Producer/ Mixing engineer to someone who has never heard of it?

They are two different roles really. My role will be anything from sitting in a room with the band working on the songs & arrangements to booking studios that will be sonically right for record or making sure the right people are working on the record to make sure the record sounds how it needs to sound.

Once you’re in a studio environment with a band, a producers role is essentially to get the best out of everyone and help with the vision for where the song needs to go and how it has to sound. I’ll work closely with the band and use my experience to guide us to where we need to be. There’s sometimes a bit of psychology involved. There might be a singer who’s quite nervous and I’ll need to get them to relax and unlock what they’re capable of. Every band is different. Ultimately the goal is to get the best out of everyone.

Is it common to do both roles?

It’s very common. A lot of producers mix their own work. Sometimes it’s just down to budgets as it’s more cost effective and sometimes it’s because the producer has such a strong vision of how they think the song should sound. Of course, there are some cases when the producer and the band sign off on the song but they want a fresh set of ears on it to try and breathe some new life into it.

Did you start by recording friends’ bands? How did you get the opportunity to work in a studio?

For me I just started recording some acoustic guitar/ singer/ songwriter friends I had, learning as much as I could. And then I blagged my way onto my first band session. I’d never recorded a band before and they asked me if I had and I said ‘yeah, loads of times.’ I just went for it and, you know, by making mistakes, that’s how you learn.

I started reading a lot of books on the science behind sound engineering and then I started buying bits of equipment and learning how to get the most out of it. It wasn’t expensive stuff but I’d sit there trying to push everything to the max and get the best sound I could out of it.

Once I’d built up my confidence, there were bands that I’d worked with early on in my career that, when they got big, it helped me along the way as well.

"if you’ve got those great songs then you just know the result will be good."

What’s the best thing about the job for you?

I think bringing ideas to life is one of the most exciting thing about it. When you’re in a room and a song you’ve been working on starts to take shape and you see the excitement on everyones faces, then that’s the moment that all of the work has become worth it. There’s a lot of things really.

On a personal level, it’s really exciting to get the chance to work with all of these different artists. It challenges me as well as there are definitely artists out there who make me up my game and it’s very inspiring to be around people like that.

Ultimately, the thing I love about the job is working on a record and then it’s out and you see so many people enjoying it. It’s such a cool feeling. Even hearing songs on the radio that I’ve worked on still gives me a buzz.

Are there some big challenges involved?

It can be very hard. It can be very time consuming and I know a lot of people who feel like they can get burnt out easily. You have to do your best to manage your time so that you have a social life as well. It’s very easy to take the work home and never escape the job. You need to find the balance.

Sometimes you can be working on a very difficult record where you’re trying to make a song happen or maybe the artist is a bit difficult to deal with. As long as you deal with everything in the right way then you’ll always come out on top.

What makes an album exciting to work on?

The songs. Honestly, it’s just great songs because if you’ve got those great songs then you just know that the result will be good. Great people also make being in the studio every day so much fun. That really makes a difference.

Is it quite important to connect with the music that you’re helping create?

I’m pretty lucky these days in the sense that I can pick what to work on now. That’s really important to me because if I don’t feel like I can bring something to the table then it’s not a benefit to me or the artist. I need that connection to the music, it’s massively important to me. I love discovering new artists and helping them develop so it’s really great to hear the new music artists are creating and helping them bring it to life.

"I need that connection to the music. It’s massively important to me."

What can an artist do to help make your job easier? Are there any do’s and don’ts?

The technology now is amazing so I get a lot of very well thought out demo’s. The one bit of advice I’d say would be to try and not get too attached to the demo. I’ve worked with a few artists who have come in with their demo’s and it’s been very hard to change anything on it because they’ve been playing it like that for so long. People call it ‘demoitis.’ Just bear in mind that if you are hiring a producer or mixing engineer, you want them to be able to do their job. They may hear things that could add so much more to the song but it’s very hard to change things if you’ve listened to the demo so much. Be open to ideas in the studio.

Another thing would be to practice the songs as much as you can because if we’re on a short amount of time then it’s important that you know the song inside out. If everyone knows the song really well then there’s time to experiment. You want to make the most of your time in the studio.

Is there an artist or album that you wish you could/ could have worked with?
I’ve always been a massive Aerosmith fan and I love all of the production on their records so that would be a dream.

Would you say they have perfectly produced and mixed albums?
I just think that their records always sound larger than life and I love big sounds. I always zone out and start listening to all of the production. I’ve always found them very interesting to listen to.

We understand that you’ve started something called the ‘Control Room.’ Can you tell us more about that?

I kept getting questions asked about production stuff, either online or at masterclasses I was doing so I decided that I wanted to set up an audio community where people who were interested in that kind of stuff could learn techniques. So I started Control Room which is an online audio community and it’s turned into something amazing and it’s no longer just about me. There’s so much cool information and ideas that get posted every day, it’s been amazing and very inspiring to learn from each other. You get to hang out with some of the best producer’s out there and they’re constantly talking about techniques that they used on records and stuff. Every day I pull out a piece of valuable information that I’ll then try out in a mix. It’s been amazing.

We have Q&A’s every month with producers and I put up multi-tracks that people can download and help them level up their mixing skills. I think loads of people have upped their game just by having these songs available to them. It’s such a good community where everyone just helps each other, even the pro’s exchange really cool tricks in there.

We’re holding a business Q&A tomorrow which is essentially for people who are starting out and don’t understand any of the terminology like ‘points’, ‘royalties’ and all that sort of stuff. When I started I didn’t know about any of that stuff and I always felt scared to say I didn’t know because I didn’t want to look inexperienced. We do thing’s like that to just help everyone get a good leg up.

It’s been a massive focus for me this year. I’ve devoted a lot of time to it and it’s just been amazing. We have so many members in there now and it’s growing every day.

Even for me, someone who’s been doing it for so long, I still learn things from it. As long as you have the right mindset and you want to push yourself then you’ll learn something new in there every day.

If you had one bit of advice for someone wanting to get into these roles, what would it be?

My advice would be to make everything you do sound the best that it can be. You never know who is going to listen to your work. Even if you think no one will ever hear it, make sure it sounds as good as you make it. Aim for the top because you never know what opportunities might come from that song.

For more Romesh check out