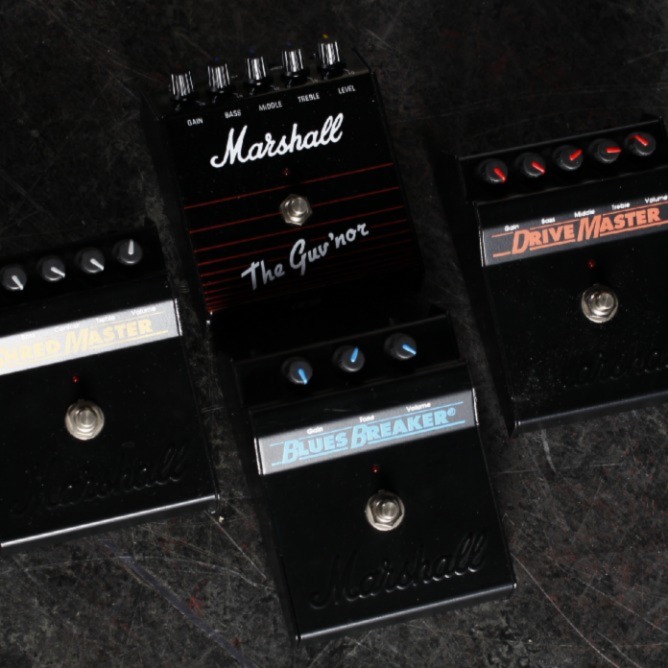 Continuing on from the Marshall Supa Wah, we'll be following the story through the production and release of the iconic Guv'nor and Mark I pedals from the late 1980s and early 90s. 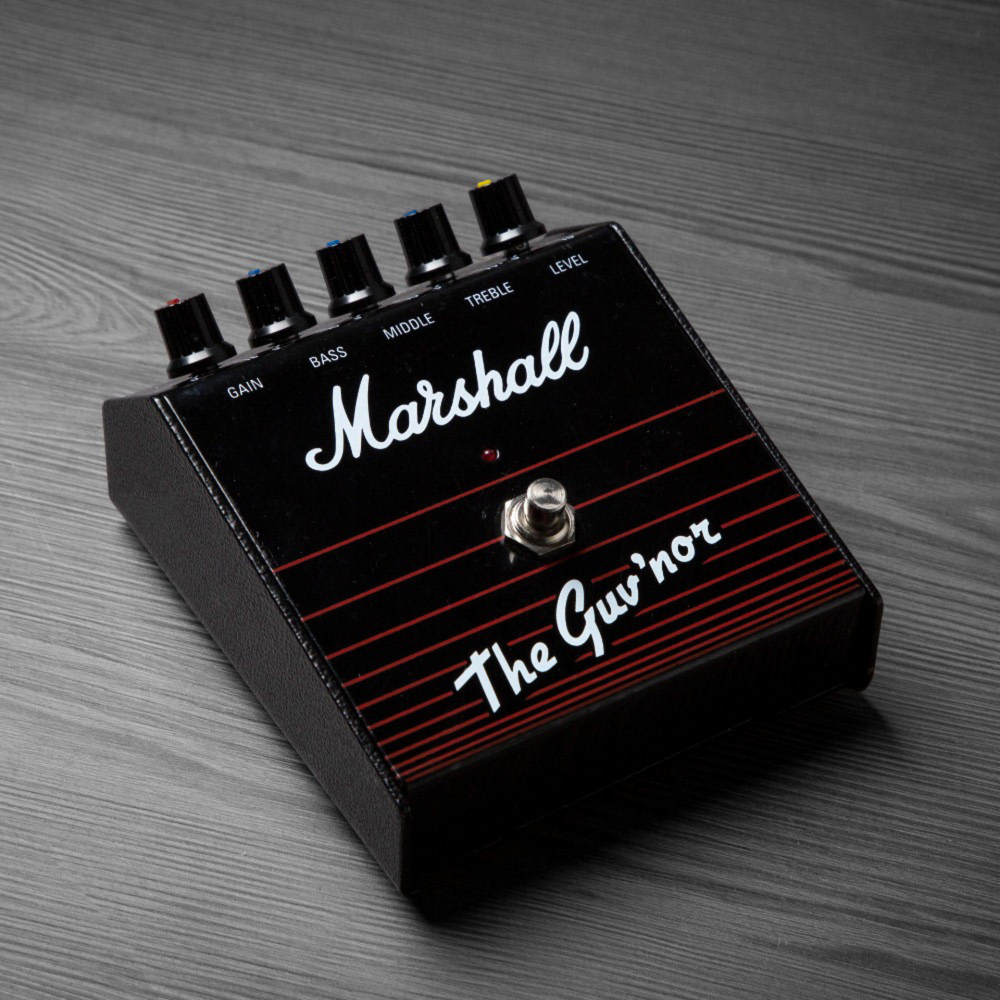 It was a while before Marshall had another attempt at creating pedals, but this time we developed and manufactured them ourselves to meet our own exact specifications. We’d learnt a lot since developing our first amps in 1962 and our first pedals in 1967. We wanted to put that knowledge into practice.

The idea was to create a guitar pedal that captured the best elements of our amps and squeezed the big black box down to a little black box and that's how the Guv’nor came to be.

Where the name came from is debated... some say it’s named after Jim ‘The Guv’nor’ Marshall himself, who was given the title by his staff years earlier as a term of endearment. Others say Jim got some players along to test the new pedals out. One guitarist absolutely loved it, claiming, “that pedal’s just the guv’nor, innit?”. Either way, the name stuck.

What’s not up for debate is quite how good it sounded. Designed to emulate the classic valve-driven sounds from a selection of our best-known amps, the Guv’nor provided a smooth overdriven sound with a touch of compression. The pedal was heavily used by Gary Moore throughout the 90s and even appeared on the cover of his ‘Still Got The Blues’ album. 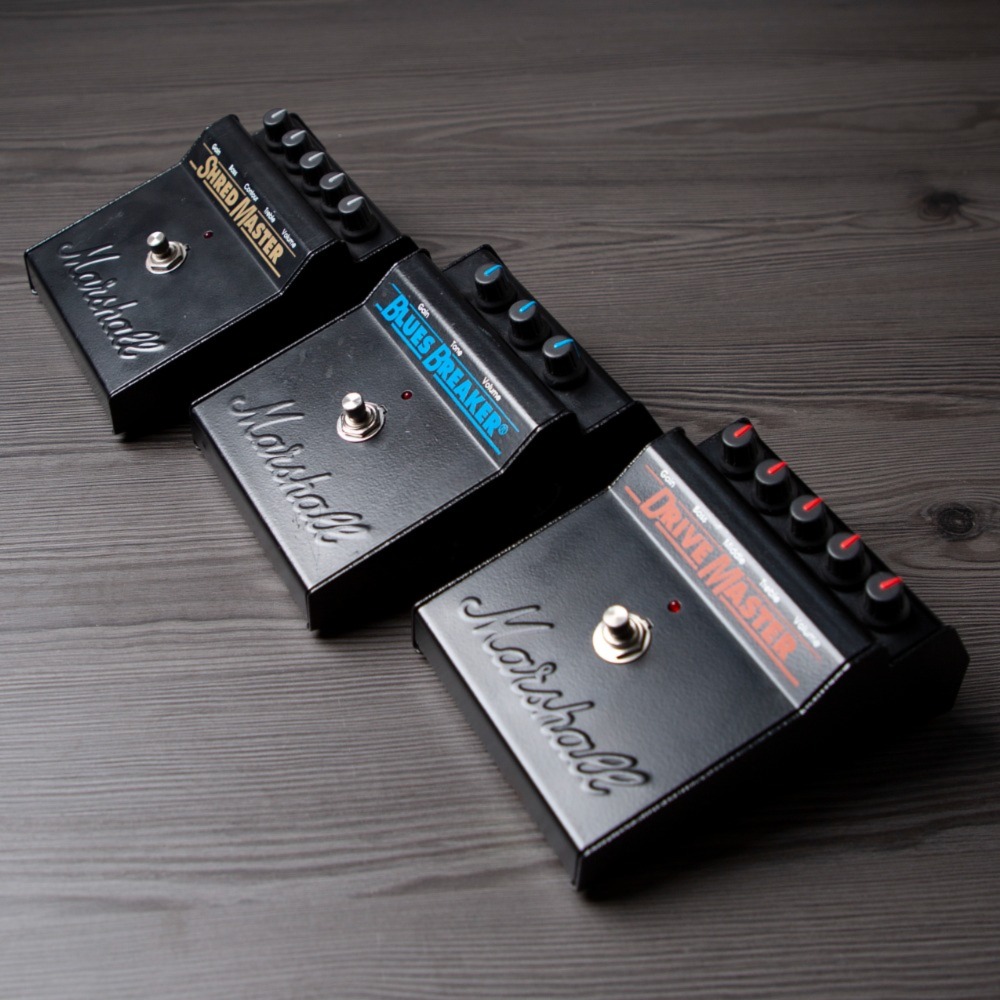 The success of the Guv’nor led to us developing three more pedals, each designed to provide players with the breakup and distortion that Marshall are globally recognised for. The Drivemaster was a slightly updated Guv’nor, while the Bluesbreaker was an organic overdrive that added lots of vibrancy and colour to your tone and was based on the sound of the Bluesbreaker amplifier. The Shredmaster was at the other end of the scale and provided more high-gain distortion, but by today’s standards, is more suited to searing leads rather than heavy rock and metal.

Originally released in 1991, these pedals were not an immediate hit and production was discontinued by 1992. However, this isn’t where the story ends, as the Bluesbreaker would see a huge resurgence in popularity later in the 90s and 00s, thanks to Steve Craddock and John Mayer relying heavily on it. The Bluesbreaker became a collector’s piece thanks to its unique sound and near indestructibility, and they remain heavily sought after to this day.

The Shredmaster has a similar story after it was repeatedly used by Radiohead’s Jonny Greenwood across ‘The Bends’ album. Fans wanted to recreate his totally unique sound, and demand subsequently skyrocketed. The scope of the tone could also be heard in the bassline on Blur’s ‘Song 2’ and became synonymous with gritty indie rock for many years to come.

The story of the Studio series
We go behind the scenes to uncover a family portrait that's been over 50 years in the making.
The history of JVM
The JVM can do a little bit of everything. We look back at the origins of the series and see why it has become the ultimate all rounder for pro musicians.
History of Valvestate
Uncover the story behind Valvestate technology that altered the way everyone viewed solid-state amplification.
History of JCM800
Relive the story of the original 'it girl' amp that defined the sound of a generation and is just as unstoppable today.
History of 1962 bluesbreaker
The 1962 'Bluesbreaker' is a name that will be remembered forever. Discover how one humble amp became a legend.
History of DSL series
We look back at 20 years of classic crunch, monster high-octane overdrive and shimmering clean tones.