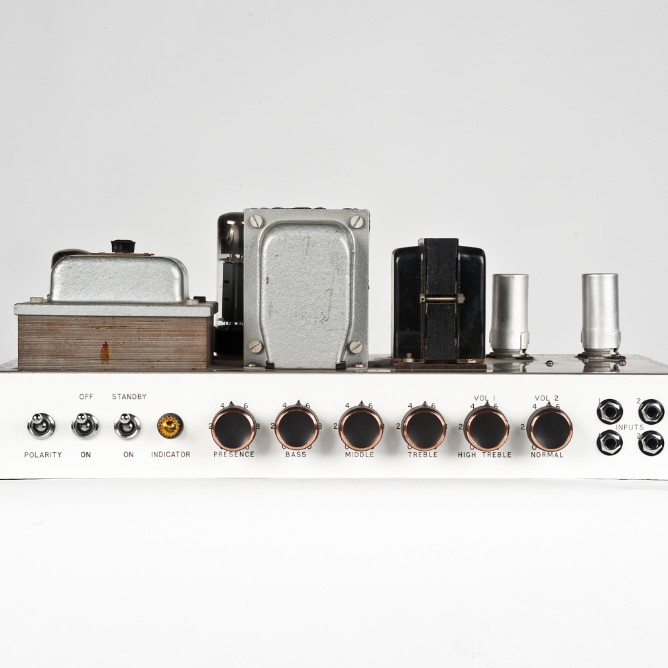 History of the JTM45

We made it 60 years ago and it's so good that we're still making it today.

It’s the amp that started it all, the Jim Terry Marshall 45, more commonly known as the JTM® 45. But rewind to 1962 and the amps available in the UK just weren’t cutting it for the grit driven rockers of the time. The most popular amps of the time were imported from overseas and often took a long time to get to the players, which left a gap in the market. Marshall decided to try and fill the gap and along came the first ever JTM 45.

The original amp was based on the Fender Bassman, the favourite amp of Terry Marshall at the time. Like the Bassman early versions of the JTM used 6L6 or US 5881 valves in the output stage, later models were upgraded to the KT66, EL34, or KT88 valves. The Marshall team didn’t just change the valves though, there were some more significant differences including the all-aluminium chassis, a 12AX7 valve as the first in the chain, and a modified negative feedback circuit which affected the harmonics produced by the amplifier.

This meant the JTM had a larger amount of feedback running through it, which not only meant that the harmonic content of the JTM was different to everything else that was around at the time, but also created the distorted, gritty Marshall sound that we’re so famous for today.

After the first prototype had been created and sold, the demand soared. turns out that added distortion was exactly what the players wanted. Orders came flooding in and the number one is now proudly on display in the Marshall office in Bletchley.

In the very early days, each JTM could sound quite different from the next. People would come into Jim’s shop and request slight alterations to their amp – a little more bass here, less treble there, extra gain and so on. We have, on record, 24 different variations of the JTM 45 over the first 8 years but the true number could be much higher. The most unique part of the first few amps however was the way their electronics were laid out, with most of it being placed into one end of the amp. These amps were known as the Offset JTM45s but placing the electronics this way made them unbalanced and difficult to carry, so this idea was quickly stopped, with only a limited number ever being put into circulation.”

Marshall was now known for its distortion and loudness. But was it loud enough?

Well it’s never loud enough! Design changes like the use of a sealed cab enabled 20w and soon after, 25w versions to be created – a healthy boost up from the original 15w JTM45’s. It wasn’t just the interior that was updated. Over the next three years, the exterior was also tinkered with, going from the original smooth black leatherette with blonde to front metal plates with a red enamel font. Jim bought these from a funeral hardware store, earning them their affectionate name of ‘coffin badges.’ Only 200 of these badges were bought and it is assumed that less than 50 made their way onto customer facing models however that number is not confirmed. Other sources say that due to the high cost of each plate, every single one was used and sold. The amp cabinets also became longer, and the thick look of the front edges was removed.

At the end of 1963, we finally get to see the all black livery that is still the choice of design on our amps today, but we are still yet to see the famous white script – that wouldn’t make its way onto amps until 1965.

The story behind the infamous Marshall stack
You’ve seen them. There’s absolutely no doubt about it.
The story of the studio series
We go behind the scenes to uncover a family portrait that's been over 50 years in the making.
The Father of Loud
Every year we commemorate the amazing life of our founder, Jim Marshall. Guitarist and vocalist, Oli Brown, joined us for a musical tribute to the Father of Loud.
History of 1959SLP 'plexi'
The people wanted louder so we gave them louder. Now the 1959SLP has a sound synonymous with rock.
History of 1962 bluesbreaker
The 1962 'Bluesbreaker' is a name that will be remembered forever. Discover how one humble amp became a legend.
History of JCM800
Relive the story of the original 'it girl' amp that defined the sound of a generation and is just as unstoppable today.
History of Valvestate
Uncover the story behind Valvestate technology that altered the way everyone viewed solid-state amplification.
History of 30th anniversary series
Brilliant in blue and dazzling in white, the 30th anniversary amps are sure to go down in history as some of the boldest ever made.
Amps
Cabinets