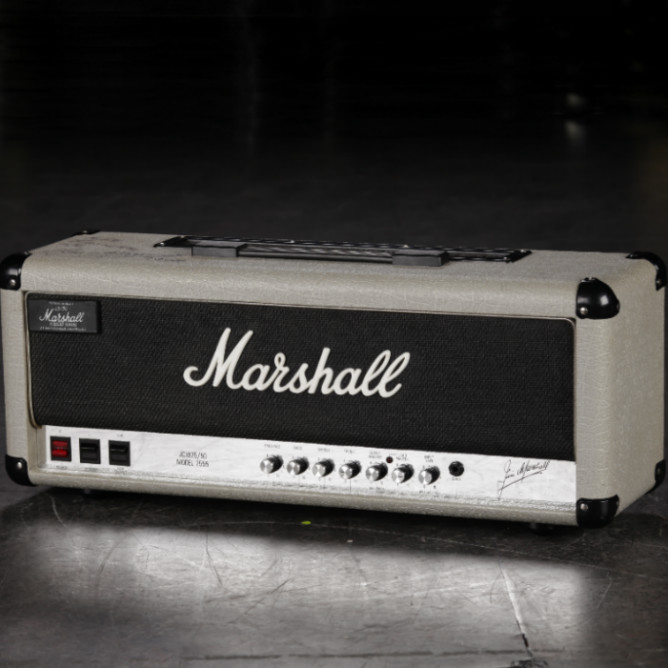 An amp fit for a king. The Silver Jubilee was designed to celebrate 25 years of Marshall, but what is it that makes this amp just so special?

Dominating the amp industry for 25 years is no small achievement but in 1987 we accomplished exactly that. So, we celebrated in the only way we knew how—we created another stellar amp. Announced at the winter NAMM show that year, the Silver Jubilee® heralded a new era for Marshall. A break from Marshall’s famous black, white and gold look, the Jubilee’s were finished in stylish silver vinyl with chrome-plated control panels. The limited amps all had special serial numbers and were completed with a commemorative plaque.

Internally, they were modelled after the popular 2203 and 2204 models of the JCM800 series. They all contained a valve output stage that allowed the amp to be switched from full power ‘pentode’ mode to half power ‘triode’ mode. This meant that the 100W heads could be reduced from 100W to 50W, and the 50W heads could be reduced to 25W, allowing a phenomenal sound to be maintained at lower volume levels. This was all possible due to clever engineering that enabled the EL34 valves to reduce the active elements used, therefore reducing the output of the valve. The pentode setting created a bright and aggressive sound while triode maintained a smooth and silky top end.

Other features included an input gain control that varied the amount of gain in the three modes and a series effects loop.

After 1987, the Silver Jubilee models became part of the JCM800 series. Renamed the Custom Series, they dropped their silver look and took on a black vinyl finish with a gold control panel. The JCM800s were then replaced by the JCM900s and it appeared as though that was the end of the Silver Jubilee. However, the amps became something of a collector’s item and with the rise of artists like Slash, who frequently used the amp on stage, the amp was soon back in demand.

Fast forward to 1995 and Slash had arrived in the UK to play Download Festival. Whilst he was here, he met up with Jim Marshall to discuss replenishing his collection of 2555 heads. They agreed to do a limited run of signature heads and at the 1996 winter NAMM, they unveiled their grand plan to the world. With the classic Marshall colours, Slash and Jim’s signatures, and the logo for Slash’s band Snakepit, the 2555SL was the amp that dreams are made of. It was even sold with a certificate of authenticity and a faux snakeskin cover to sweeten the deal. For players that truly wanted to capture the fullstack spirit of Slash, there were matching 1960ASL and BSL cabs, loaded with Celestion Vintage 30 speakers and finished with a Slash plaque. Unsurprisingly, the 2555SLs were an instant hit.

In 2015, the Silver Jubilee series came back with a bang. The 2555X shared many of the same qualities as its predecessor, including the silver vinyl cladding and chrome control panel. The back panel was modified so that the rotary switches were removed and replaced with five speaker sockets and permanent internal wiring for the voltage of the country it was sold in. It was quickly adopted by artists like Slash and Joe Bonamassa who were both fans of the original, as well as modern artists like Dan Dorney (The Hunna) and Jeremy Widerman (Monster Truck).

With its bold silver looks and classic Marshall tone, the Silver Jubilee has earned its place in amp history. A real comeback kid, we can’t wait to see this series inspire a new generation of guitar players.

Learn more about the tones available from the 2555X below

The Father of Loud
Guitarist and vocalist Oli Brown joined us for a musical tribute to our founder, Jim Marshall, the Father of Loud.
History of 1959SLP 'plexi'
The people wanted louder so we gave them louder. Now the 1959SLP has a sound synonymous with rock.
History of 1962 bluesbreaker
The 1962 'Bluesbreaker' is a name that will be remembered forever. Discover how one humble amp became a legend.
History of JCM900
With all the gain you could ever want, the JCM900 is an all-valve masterpiece. Find out more about the 90's icon.
History of JCM800
The original 'it girl' of the amp world, the JCM800 is truly unforgettable. Relive the amp that defined a generation.
History of Valvestate
Valvestate technology altered the way everyone viewed solid state amplification. Uncover the story behind a true game changer.
History of 30th anniversary series
Brilliant in blue and dazzling in white, the 30th anniversary amps are sure to go down in history as some of the boldest ever made.
Changing the Game
Find out how Natal's founder, Alan Sharp, revolutionised percussion manufacturing empowered drummers to take centre stage.
History of DSL Series
Known for providing classic crunch, monster overdrive and shimmering clean tones; we look back at 20 years of the DSL.
The story of the studio series
We go behind the scenes to uncover a family portrait that's been over 50 years in the making.