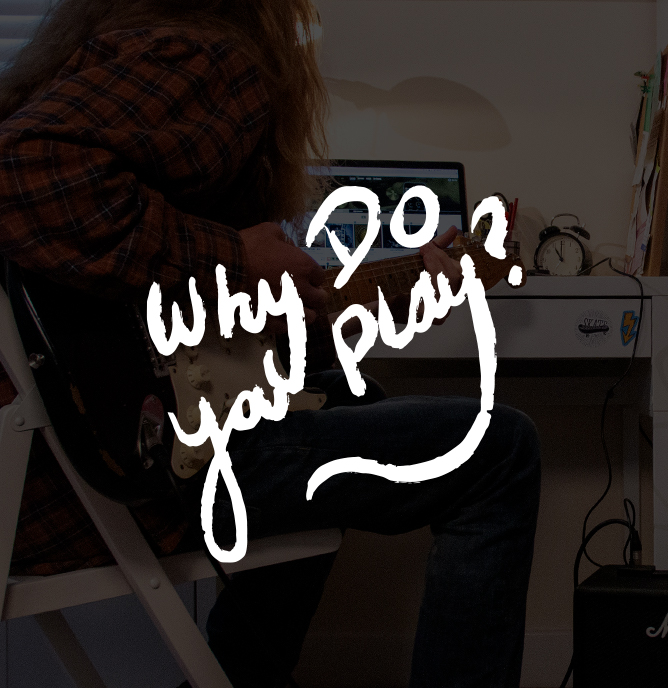 Why do you play?

We set out to uncover exactly what it is that drives musicians. From people playing at home to express themselves or travelling across continents to play in front of an audience. The reasons may differ but it’s all part of the same driving force that’s behind each of us to make music.

We've worked with our endorsers, Youth Music and Girls Rock London and asked… Why do you play?

We spoke to performing artists, charity workers, vulnerable teens/adults, bedroom musicians and more, all with their own story to tell. Find out more about their journey by clicking the names below.

As frontman of Biffy Clyro, Simon Neil has released multiple albums and played venues around the world in front of crowds ranging from 100-100,000 people. In a recent interview with Marshall Simon has spoken about music as “the gift that really keeps on giving, even when life can get tough.”

As the frontman of a band that began at school with his friends, and is now headlining festivals, still with the same tight-knit group of mates, he’s fully aware of the impact music can have on a person’s life. When discussing this Simon doesn’t mention his success, but instead put’s why he plays down to the way that “music can bring you joy, whether it’s your own or someone else’s.”

While MIRI’s music weaves stories, it’s her day-to-day life that she uses for inspiration. With songs discussing political injustices and the challenges we face internally and externally, MIRI is not afraid to tackle tough subjects and shares her experiences candidly. MIRI also has curated, hosted and performed at a host of venues across Europe, whilst also supporting music and mental health awareness charities and community projects. She is part of the Girls Rock London team, and is also the curator of Diversity Platform. MIRI is also on the BEAT Board for The Featured Artist Coalition, and is a Social Media Ambassador for The F-List, a UK directory of female and gender minority musicians.

Paul Goumou is a whirlwind drummer who has used music to have a positive impact. After finishing a sentence as a 17 year old at the Youth Offending Service in Brixton, London, he spent his time “trying to figure out how to get back into music and do positive things”. Since then he’s been part of London’s African music scene, playing percussion for the Balimaya Project which combines West African music with Jazz and the sounds of Black London, to create something unique and exciting.

Music has taught Paul that he “can’t just be a good musician on my own. It’s better to mix in and gel with everyone else. Rather than being an introvert, it’s better to put myself out there”. For Paul the reasons behind why he plays music offer inspiration to himself and his friends, whilst also providing things for him to focus on.

As the pounding force behind the Stereophonics, Jamie Morrison knows what it takes to perform night after night for thousands of fans. He also knows the opportunities that music has given him. After spending 18 years as a professional musician, his drive to play can still be put down to the same factors that made him first sit behind a kit as a young boy, which are a desire to create and a love of making music.

Initially as the drummer for indie soul band The Noisettes as well as a regular session musician, Jamie found music was a way for him to communicate with other people. Also, as a successful producer Jamie has developed the ability to enjoy music either whilst working with others or independently, which has led to him now making music every single day, no matter what.

Music isn’t just a personal thing. In the cases of Julia & Colin music connects them to each other, as well as linking them with their family, friends, students and other musicians. Julia and Colin teach music as a way to make a living, as well as each performing themselves for audiences across Europe.

Music also provides an avenue for the pair to bond with the rest of their family. Their love for music has filtered down to their children who each now play their own instruments, often reuniting from the various locations across the UK to play together and spend time with each other.

For some people, a love of music isn’t something that appears immediately, and often follows a journey or event that uncovers an inner desire to play. That was the case for Vicky who discovered that she loved playing after living in South America, where she was entranced by the constant sound and rhythms around her.

Since she began playing drums regularly, Vicky is always striving to recreate those feelings of being lost in the music, whilst being on the same wavelength as other players around her. It’s led her to working with Hans Zimmer, Clean Bandit and Brian May, whilst also hosting workshops around the globe.

K-Dog first began making music when he was at school. For him, music serves multiple purposes, ranging from making him feel confident and excited through to helping him to relax and escape from the pressures of the outside world.

He regularly works alongside Lindsay Corstorphine. This collaboration helps both musicians to feel comfortable and allows them to express themselves in ways that nothing else can. K-Dog has a unique approach to making music, but it all boils down to the simple fact that for him, making music is fun and makes him happy.

Hailing from South London, Shallise was a keen musician from early on in her life, and now creates music within a project run by community arts organisation, Raw Material. She began creating music as an outlet to escape from bullying as a teenager, before also using music to help her cope following the loss of her dad.

Now Shallise makes music to escape from the stresses of day-to-day life, and to create a new world in which she can truly share her emotions. It also provides her with confidence to tackle what’s happening in her regular life and helps her to let her emotions out and move on.

Jodi, multi-instrumentalist and all round fantastic person, uses music to connect with people and encourage them to play for themselves. They are not just a guitar, bass, drum and synth tutor, but also a big part of the organisation team behind First Timers Festival; a music festival with workshops aimed at providing new musicians with knowledge and experience.

Jodi is also a big advocate encouraging people from marginalised communities to start playing music. Jodi is part of the York LGBT Forum, as well as being the international representative for the Girls Rock communities. Girls Rock is an award-winning charity that provides quality music programming for young and adult women, trans, and non-binary people.

From helping make sense of what’s playing on her mind, to expressing feelings in a way that captures people’s attention, Ishani creates standout music with her breakthrough band Breakup Haircut. For her the connection between the music she creates and the people who enjoy it makes it all worthwhile. It creates bonds that tie her to her fans, and provides Ishani with a sense of value.

This understanding of what music can offer players has led Ishani to be part of Key Changes Music, who provide music industry-focused mental health services. On top of this, Ishani has joined the organising committee of First Timers Festival; a DIY festival that encourages diversity within music.

Whatever the reasons you play… we’ve got the tools for you.

If you’re looking to get started playing guitar make sure to check out our Making Music with Marshall series. It’s entirely free advice to help you to get your head around music theory, teach playing techniques and help you to learn the skills needed for different genres.

Also make sure to check out our Marshall Workshop and Natal Workshop, both of which we created to help players with their most common queries. From getting the most out of your amp right through to tuning your kit, we’re here to get you playing.

Getting Started
We've taken it back to basics. From choosing your amp, to perfecting your settings and effects, here's how you can craft that killer sound.
Understanding your amp
We're here to help you gain a better understanding of your amp, its features and what it can really do.
Making Music with Marshall
Free advice and tutorials to get your head around music theory, playing techniques and the skills needed for different genres.
Marshall Glossary
If you're new to this the amount of terminology can be daunting. We've compiled a list of every term you need to know
Natal Glossary
Need to know your sticks and skins from your other drum things? Thankfully we've got this handy guide to help you.
Arming the artists
Guidance to help you perfect your playing styles and play to your potential.
Moving on up
From taking your first steps to managing your career. This series features advice to guide you on your path as a musician.
Marshall FAQ's
Got an amp related question? We answer your most common (and uncommon) inquiries.
Natal FAQ's
Got a question about Natal? We tackle your drumbeat queries.