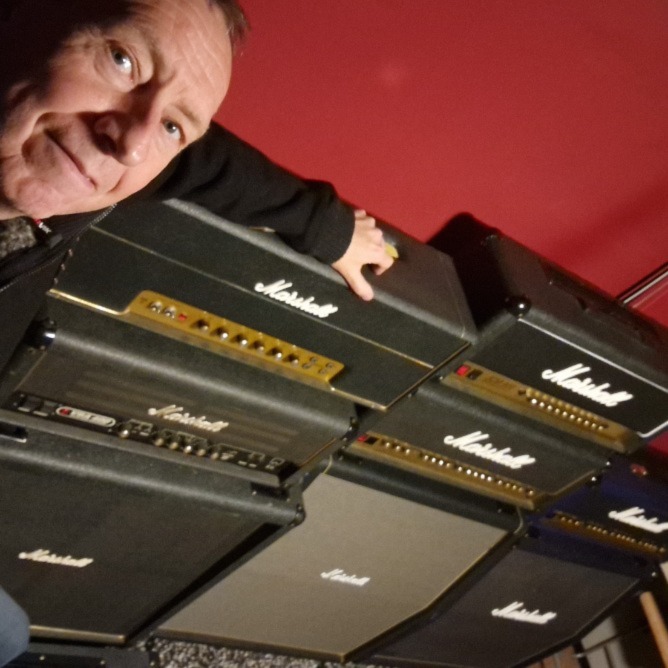 Born in Geleen in the Netherlands in 1964, Erik started playing guitar when he was 14 years old and started collecting and using Marshall amplifiers only a couple of years later. Currently, he lives in Silvolde in the eastern part of the Netherlands - during the daytime Erik works as a radar engineer and in his free time plays guitar and is part of a local band called “The Optimistics”. 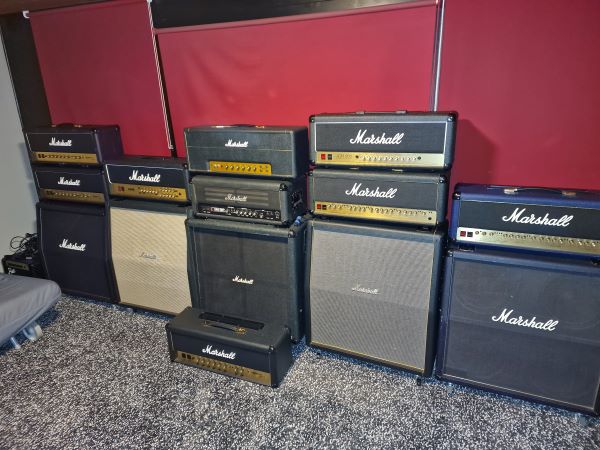 What’s in your Marshall collection?

Well, quite a bit actually, so let’s start with the guitar amplifiers:

The bass amplifier collection I own:

And here a Park as well: the 20 Watt bass combo

Are you part of a wider Marshall or music community?

Well yes, primarily I’m a bass player who - as most bass players do - started out by playing guitar, collecting guitars and amplifiers. I got into bass playing because I live in the Eastern part of Holland where rock music is still alive and well, even ACDC’s Angus Young owns a house in this part of Holland! I am a part of the local music scene here, I first started by joining a blues band from Arnhem and since then I’ve been rolling from one band to another and then into another band again, currently I play guitar in a cover band dubbed “The Optimistics”.

My Marshall collection didn’t go unnoticed with any of the bands that I was a part of, as well as the fact that I could repair a Marshall amplifier. Eventually word got out about this and a trade of a Gibson Flying V for a Marshall JCM800 amplifier led to me becoming the ‘go-to-guy’ for repairs on any Marshall amplifiers for local cover bands.

Collecting Marshall amplifiers seems to be a hobby of quite a few guitar players in this part of Holland, hardly anybody I know owns only one Marshall! This leads to many a night spent in shacks or rehearsal rooms comparing tones and gain.

What does Marshall mean to you?

Like the David Bowie song: Sound and Vision! To me nothing beats the sound of a Marshall amplifier played at volume through a Marshall 4x12 cabinet. Yes, there are subtle differences between the various Marshall amplifiers in terms of controls, tubes, and channel configurations. But all have that unmistakable “grith growl” that only a Marshall has. And for vision… What can beat a backline on stage build out of stacked Marshall heads and cabinets? You can’t go wrong with that look.

So, Marshall to me is a Wall of Sound and Vision.

What’s your first memory of Marshall?

Seeing a picture in a music book of Jimi Hendrix with two Marshall stacks behind him, and then seeing Jimi Hendrix on television playing at the Monterey festival, that burned an image in my schoolboy’s brain.

Later on, I noticed those same Marshall stacks on various album covers like Motörhead’s and Kiss’ albums. I knew by then: I need to have that amp as well! 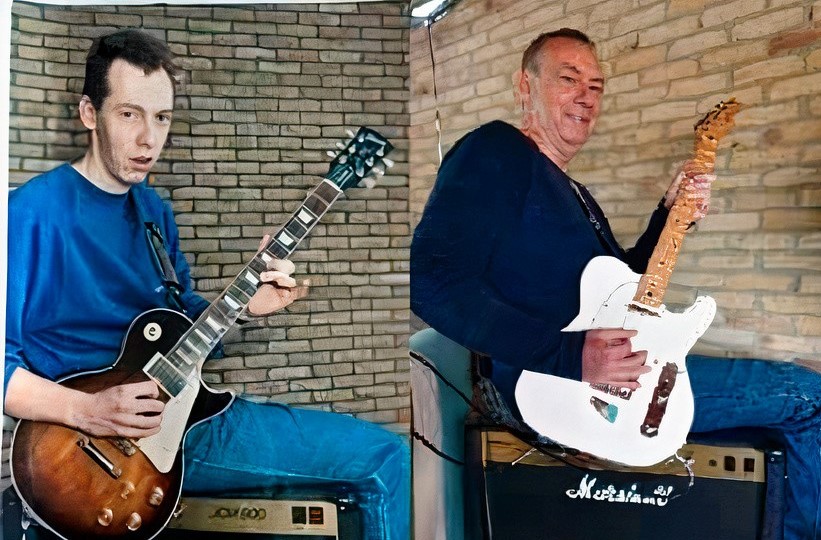 What was your first amp?

My first amplifier was an old tabletop record player with build in 20 watt tube amplifier. With some suggestions from my grandfather, I got rid of the record playing bit and modified the amplifier so it could connect to an electric guitar. It worked for some time, but by that point I already had my heart set on a Marshall head.

The first Marshall head was a 1973 model 1969 100 Watt Plexi. I remember I was 17 years old, I bought it in 1982 at Music House Daan Smit in Maastricht the Netherlands. It was an old beat up head once owned by the Dutch band “Partner”. I didn’t have a cabinet yet, so I first hooked it up to my hifi-speakers – it’s safe to say… that didn’t end well!

The Marshall head was fairly beat up, and with all my experiments of hooking up speakers it blew up quite a lot as well. After a long period of trial and error I learnt how this amplifier worked and how to repair it, change tubes and bias it.

What made you choose Marshall?

Well, it started with this “Wall of Sound and Vision” in my mind and trying to emulate the sounds I heard on records that I loved. Once I got a proper guitar and a 100 watt Marshall half stack I knew and felt – literally felt – that this was the right sound for me playing guitar.

When I was looking for a bass amp it was a little different… I had tried many amps with no success. When finally, my bass guitar teacher suggested to me that I should try his Marshall VBC810 cabinet. Once I gave it a go I knew that I had to try it with the matching head. It took some months of searching to find a Marshall VBC400 head, but it was worth it. When I connected the two it was the sound that I’d been searching for.

Who is your favourite artist that plays a Marshall amp?

There are many artists that come to mind. But as a bass player I pick Lemmy Kilmister from Motörhead. Nothing can beat Lemmy and his amps.

As a guitar player I’d have to say Lzzy Hale of Halestorm. She brings a fresh approach to playing rock using Marshalls, and I love her sound. 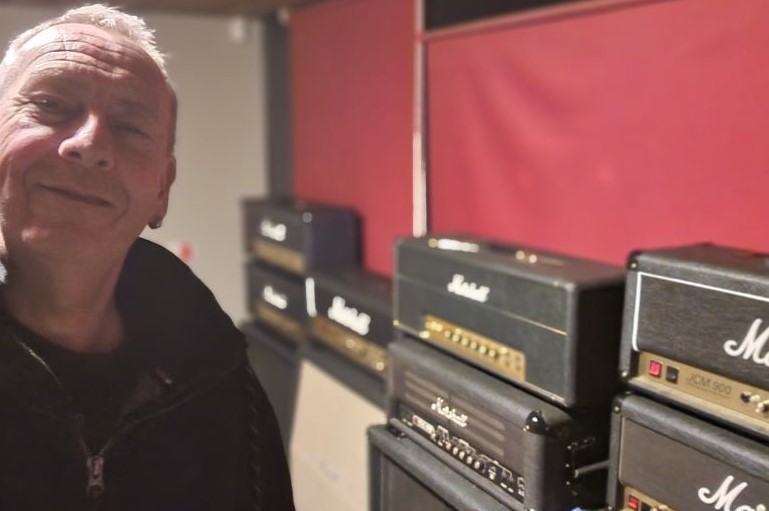 If you could build your very own signature Marshall amp, what features and functions would you choose and why?

Over the years I have repaired and modified many amplifiers. Quite often it was adding send and return loops and master volumes to model 1987 50 watt and model 1959 100 watt heads. All those features have been covered on later models. But I would like to see a Vintage Modern where the detail control adds gain as if it were a JCM800 amplifier and where there would be a foot switchable second master volume, so you have boost for solos like the JCM900 SLX heads had.

But to be honest the modern day JVM models cover almost all sounds and features one could wish for. So maybe I’d settle for a JVM in purple tolex to match the other purple heads I have.

To me the Vintage Modern was and still is the ideal combination of the old school style Marshalls and modern day amplifiers. It combines those loud and crunchy old two channels in a more controllable matter with body and detail pre-amp controls with the switchable dynamic range. Simple and very effective.

But I do admit that working at home or in a studio I more and more rely on the JVM210 head. Since it has more channel options to cover for different styles of music and it has good recording output connections, but on stage with guitar my go to amplifier is a Vintage Modern.

Get to know other superfans

Axel Haefner
Actor, musician and presenter Axel has been playing guitar for nearly 40 years. He draws his inspiration from Guitar Hero Jimi Hendrix.
Clinton J. Keating
Clinton's musical influence comes from his upbringing on New Zealand’s South Island and his time spent in Canada and Europe.
Edu Trinnes
Edu Trinnes, artist Marshall Brazil, student of Kikko Loureiro, tells a little of his history with Marshall amplifiers.
James Pace Band
Starting in 1987 with just a Micro Stack, James Pace Band is now an established regional act.
Michael Oroszi
From the moment he saw Jimi Hendrix’s iconic stacks, Michael knew that it was Marshall that’d give him the sound he was looking for.
Philip Snyder
Since the 1980s, Philip has had the great fortune to play and record with some wonderful and very talented musicians.
Tommaso Lanzoni
Tommaso is a collector of vinyl’s, CDs and of course Marshall limited edition amplifiers.