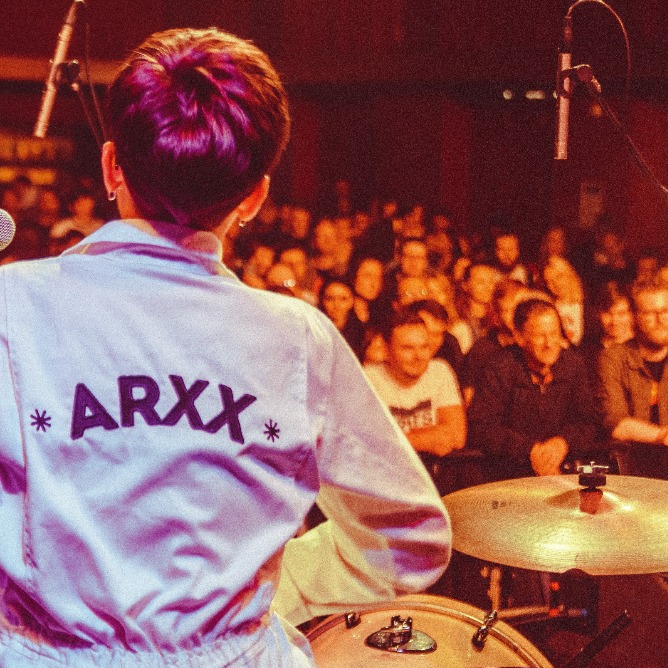 ARXX are a Queer Alt- Rock Gal Pal Duo. They have been making moves all over the UK and Europe, including appearances at BBC Radio 1 Big Weekend, Great Escape, Icebreaker,  and Left Of The Dial, headlining House of Vans Next Era show, supporting Black Honey, Liz Lawrence and Pillow Queens on their UK Headline Tours.

Now, having been making music together since 2017, they've received acclaim from the likes of BBC Radio 1's Jack Saunders, Sophie K and Huw Stephens, Radio 6's Steve Lamacq and John Kennedy on Radio X who they did a live session for in 2021.

ARXX  landed their first TV sync in 2021, with their single DEEP being featured on Prime Time BBC One for the Match of The Day coverage of the 2021 Euros.

They've received 1.7+ million streams and have been featured on editorial playlists such as New Music Friday, Hot New Bands and The Rock List.  Their latest singles have received acclaim from the likes of: NME, Fred Perry Subculture and KEXP collaborating with Katie Tavini ( Arlo Parks) and Steven Ansell (Blood Red Shoes).

“The duo have a knack for bruising riffs and deadpan lyrics.  Their no-f*cks spirit is infectious and invigorating.”