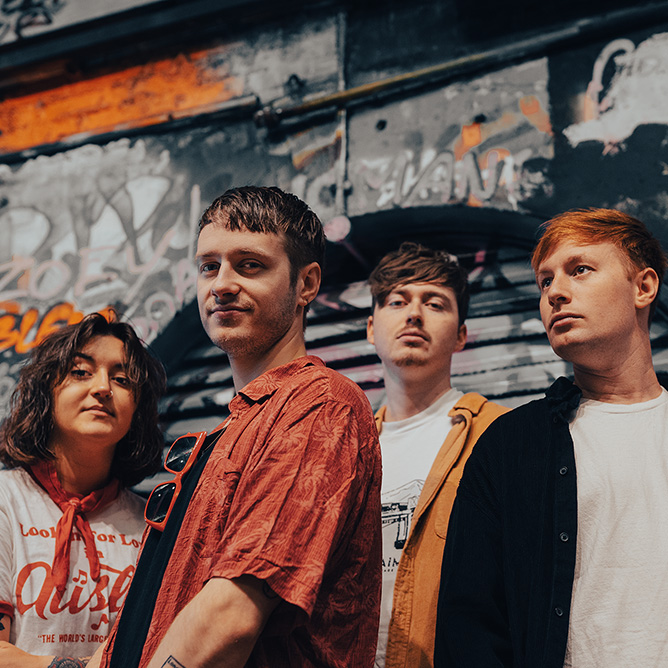 Formed in the heart of England in the town of Northampton, Sarpa Salpa have evolved both physically and musically to achieve their current form. Marcus Marooth (vocals/guitar), George Neath (guitar/synth), Meg Amirghiasvand (bass/synth) and Charlie Doe (drums) are four friends whose individual tastes and talents came together perfectly to become Sarpa Salpa. With influences spanning the breadth of the indie, pop and rock spectrum, Sarpa Salpa create a sound that is uniquely their own and has won them a loyal fanbase across the UK and beyond.

With extensive support from the likes of BBC 6 Music legend Steve Lamacq and BBC Radio 1 tastemaker Jack Saunders, Sarpa Salpa have amassed an impressive array of radio accolades. Sarpa Salpa’s music has also been used several times on hit E4 series Made in Chelsea bringing their blend of indie disco to a whole new audience.

TV and radio success aside, Sarpa Salpa are known for their energetic and powerful live show. Having played nearly 200 shows around the UK the band are now selling out venues across the country from Manchester to Portsmouth. Their reputation has earnt them slots at Radio 1’s Big Weekend, The Great Escape, SXSW, MaNo Fest  and Festival Les Expressifs as well as support slots with McFly, The Amazons & The Lottery Winners.

In 2021, Sarpa Salpa were awarded the prestigious PPL Momentum Fund to finance the release of their EP “A Feeling You Can’t Replace” which has gone on to receive over 250,000 streams across Spotify & Apple Music alongside a run of 12” vinyl which sold out in 48 hours. With over 1,000,000 streams across their releases Sarpa Salpa look set to have a huge year in 2022.

"A stadium sound in your local venue"