Behind the sticks with Simon Finley

Between performing with Echo and the Bunnymen and writing for TV and film Simon Finley is a busy man, but he spared 5 minutes to talk about how he’s made his mark in music.

Did you always want to be a drummer?

When I was 6 or 7 my parents got me into playing piano, but it’s my dads’ fault that I’m a drummer. He was a musician and was in bands in the 60s, and he pretty much forced me to have a drum kit! I was turning 9 and he said ‘I’ll get you a drum kit for your birthday but I was like ‘I’d much rather have some Lego!’. I watched my dad play it for a bit and watching that got me interested, so I tried it and from then on I was hooked.

For me it’s always been about playing in bands. When I started drumming I had a few lessons but I learnt the most by putting records on or getting mates round and playing along. Now I’m gigging loads and that’s my practice. Like Keith Richards said ‘you can practice all you want but doing one gig is worth a thousand rehearsals’.

I try and practise rudiments as much as I can but that’s more to stretch out and keep the muscle memory going. The best practice is getting out that and playing.

What’s your preferred set up and kit configuration?

At the moment I’m using a traditional set up, so one rack tom and one floor tom, but with the Bunnymen I’ve got an additional floor tom on my left. A lot of their music is based around the tom fills. The original drummer was known for crossing his arms and playing with weird techniques but I find it’s easier to just have the extra floor tom.

Is that something that you had to work on when you first joined Echo & the Bunnymen?

Definitely. When I first joined they sent me the setlist to learn and I didn’t really know the early stuff. I didn’t realise quite how good Pete de Freitas was, and how full on his parts were! It took me a while to get up to speed.

Did it feel odd stepping into a band that already existed and playing their songs?

Definitely yes, it’s totally different doing your own music. Echo & the Bunnymen is Ian and Will’s band, so onstage it’s all about letting them lead the way. We have different parts of the sets where we drop it down or jam songs out so it’s all about finding the rhythm that supports them. If it’s your band you are calling the shots and making the creative decisions so it’s just a different approach.

Ian writes the songs and Will contributes a large chunk of instrumental ideas that develop into songs but there have been occasions where either Ian or Will would bring in a groove that the band would just jam out and each find our own way with the song. So there is freedom to get creative with our parts. This happened a lot on the album Siberia that was produced by Hugh Jones who did some of the very early Bunnymen stuff. He was very thorough with every instrument and he would sit cross legged in front of the drum kit bouncing ideas off me until we both felt that each drum track really worked with the dynamics of each song. It was pretty intense but I loved every minute of it. 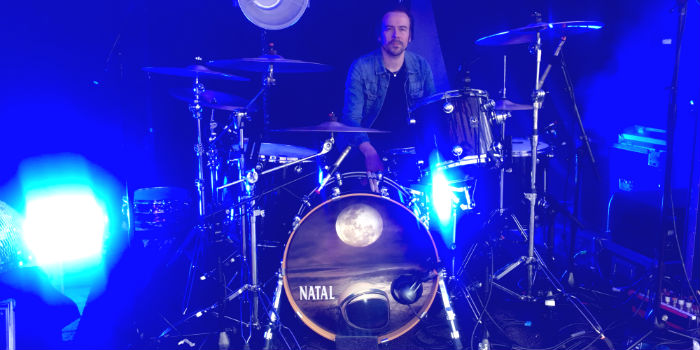 You’ve also had success composing scores for film and tv. How did you get into that?

I’ve been into instrumental music since I was a kid and I started writing music for my old band that we were pitching for tv. From that I got a taste of it and started writing instrumental pieces for documentaries and other things. There was a couple of guys who had directed music videos that I’d stayed in touch with and they knew I was getting into writing for tv, so one of them asked me to write a bit of music for a short film they had. From there they gave me another bit to write for, and it’s just gradually built up over a number of years.

Do you approach that differently to playing for a band?

Yeah definitely. You’re literally sitting on your own behind a piano for hours and hours a day so can get cabin fever! It is a completely different thing. Being in a band means bouncing ideas off each other whereas when composing for the screen you are bouncing ideas off the film instead, so your inspiration is different.

Like working with a range of musicians you also need to get used to working with different directors. Some will provide temporary music and will place that where they want your music to go. That helps to give you an idea of what they want. Sometimes that’s good and sometimes that’s difficult as they become attached to the temp music, so you need to move it on and make it unique whilst still fitting in with the temp music that was suggested.

What’s up next for you?

We’ve got some festivals with the Bunnymen and we are planning to get the next album finished by the end of the year. We’re planning a big campaign and world tour plus lots of festivals. Personally I want to work on more tv and also get into composing for trailers. I’m planning on pitching to a few publishers for that so let’s see what happens.

Who are your drum heroes?

The first drummer I got into was Vinny Colaiuta. He played with Frank Zappa and Sting and was also a top session musician in the 80s. I like him because he wasn’t flashy. I watched a video from about 1984 celebrating drummers and he was the only one who wasn’t doing loads of solos, so that’s what attracted me to his style. From there I got into Chad Smith and of course John Bonham has been a big influence as well. Phil Rudd too because of that simple solid style that stands out and drives the song on.

What do you look for in a kit?

I like to have a lot of punch to the toms but also a lot of musicality to them. I love my vintage kits in the studio but they can’t hack tours! Especially with the Bunnymen that punchy bottom end tom sound really works. Since using my Natal Maple Originals kit one of the things the sound engineer said was ‘these toms sound perfect for this kind of music’. With the 13”, 16” and 18” toms that I’m using I get a good blend of punchiness and weight too. As for snare drums I like bottom end but balancing that with enough attack as well. I don’t like anything too pingy, I’d rather have something that drives the song along.

My drum teacher when I was a kid used to say ‘just listen to the song’. It sounds really simple and is a bit of a cliché but something my dad used to say was ‘there’s lots of drummers that are flashy but it’s hard to find a drummer that can play a solid, reliable back beat. They’re the ones that are going to get the gig.’ That’s what I’ve always lived by. My mum always talks about Ringo and says ‘he’s only got two cymbals’ but I always say back ‘because that’s all he needs!’.