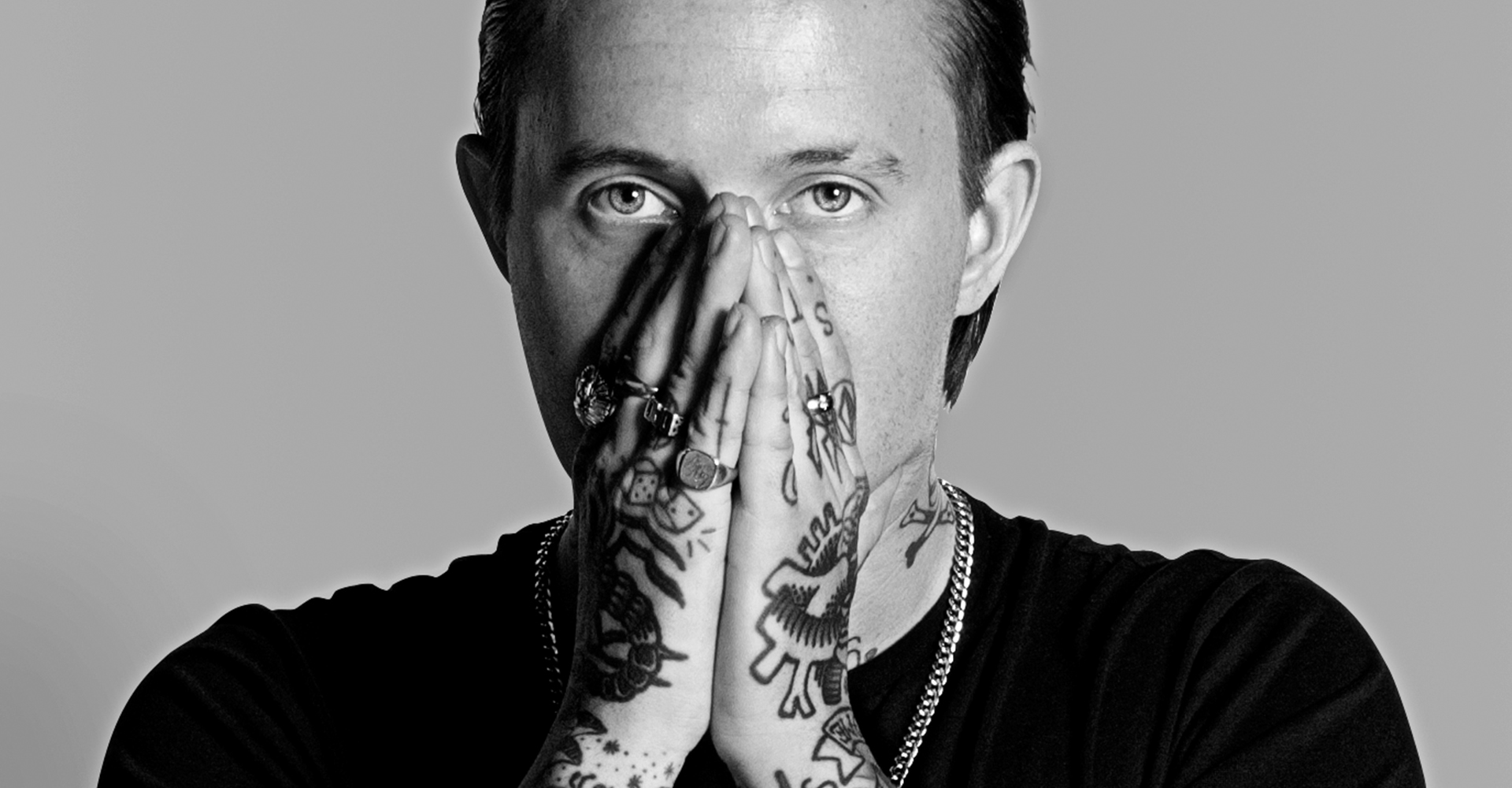 GET HIM TO THE GEAR

Laurie Vincent drops by Marshall HQ to pick up his new rig.

You’re here today to pick out some new gear. Why are you changing your setup?

I want it to look neater, visually. I like the idea of a wall of cabinets, looking all neat. Nothing harsh.

Has anything caught your eye while you’ve been here?

Yeah the pictures of me! Yeah, the vintage gear. I’m really into all the different cloths you can get and just playing around with the different types of Marshall. I really like some of the stuff in there. I’d like to have a go on the Marshall motorbike. 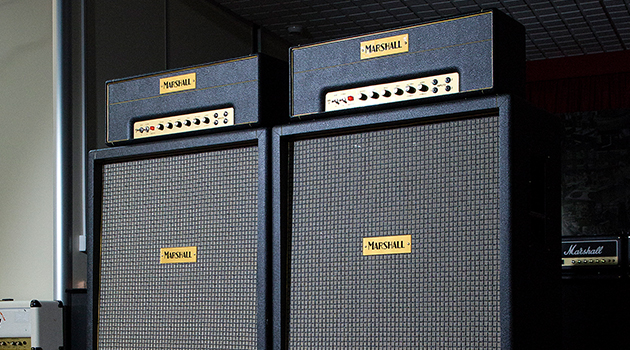 Tell us a bit about your rig and the Marshall gear you’re going to be using – what do you like about them?

I’m about to start using two JTM45s with two 4x12 greenback cabs, 1960BXs. And I’m running them in stereo, with stereo FX which gives you that real spread out wall of noise. I want to have a broader range of the soundwaves so to speak, just to fill up the space on stage. Especially when you get to the bigger stages, having one cab on the floor it can miss you and I’m not into having monitors. I’d rather hear the sound of the amps, they just have that really warm, classic sound.

What sound are you looking to achieve?

What guitar(s) are you playing at the minute?

Well I just came out the studio and I was using loads. I was mainly using a Fender Telecaster and a Gibson Les Paul. Then obviously my Mustang 90 and I also used an SG. On one track I even used a Gibson Explorer. On the album, there are like four guitars. It’s mainly Mustangs and Telecasters. 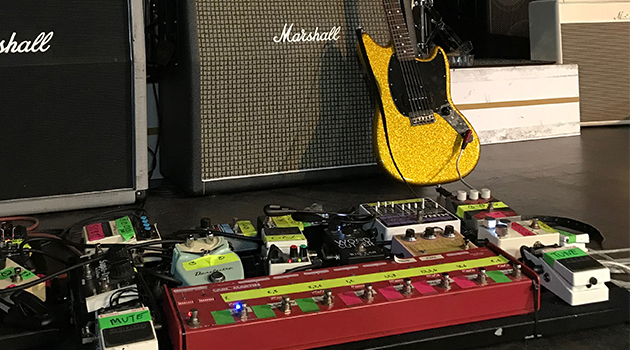 We’re as excited as everyone else about your new music. What can you tell us about it?

I think our new album is like the four corners of Slaves. We’ve got everything that’s ever influenced us and stuck it into one album. I think over the course of our last three bodies of work we’ve gone into loads of different territories and this album really just sums up our sound I think. It’s heavier than it’s ever been and its softer than it’s ever been. It’s a short, sharp blast.

Yeah it was amazing. ICP studios is legendary. It’s the amount of gear they have there and it was a proper old school residential. There was a chef. We just worked from 10am to 2am every night effectively. It was a really good experience.

And how long did it take you?

4 weeks? Yeah but the last 2 albums only took ten days each so we had loads of time.

How do you create such an amazing sound with just two people?

It’s a mystery. Even I don’t know. I think the drums add a lot to it. The way that it’s a simplified set up. Keeping it simple and straight up, a few pedals here and there.

Does it help that you’re mixing a bass rig in there and two Marshalls?

Definitely. Yeah that’s a big point, having a bass rig in there.

What do you like about combining your art and your music?

It's having something really creative that I do completely for myself, my art, and it gives me something to do when I’m not doing music. Being creative is like the only thing that gets my head straight. It’s really good [because] when you’re touring an album it’s not very creative so it’s good that I’ve got something else to do when I’m touring. Then when I make music, I probably don’t make much art. Just having lots of outlets is really good.

Has becoming a father changed the way you write?

I don’t know. He loves the new album. Every time I put it on he points at the speaker as soon as the song starts and he dances along to it all. So I guess so. I actually seek his opinion a bit and the songs that make him dance, I end up liking more. But I’m not sure if its changed the way I write so much.

What’s the best thing about being a playing live?

Just the instant feedback. That instant gratification. Nothing else is quite like that because, especially being British, we don’t really like to give people that much positive praise regularly. So to walk on stage and someone to react in such an insane way to your music is just like pure adrenaline. It doesn’t happen in your everyday life it’s like you crave it.

Who are you listening to at the moment?

Who would you say were your biggest influences growing up?

Slash, as we talked about earlier. Starting off with Slash and I got more into people like Tom Morello, Kurt Cobain. Then like early teens was when I discovered Graham Cox. Then that’s when I went off and did my own thing. 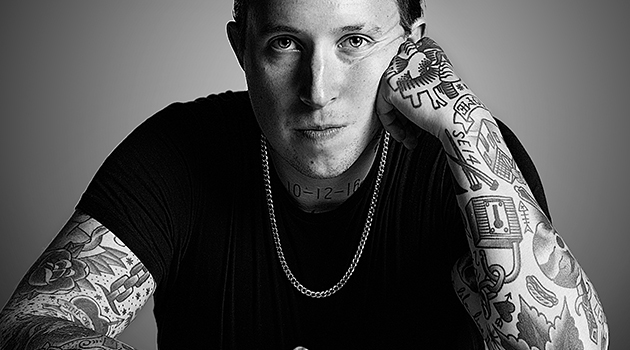 You guys are supporting Foo Fighters this year, excited?

Like that’s a bucket list dream that I never thought we’d ever get to do. We got offered a show at the O2 with them in September and we were away so we had to turn it down and that was heartbreaking and I thought we might never get the chance again. But yeah we got this one. I can’t wait to get a picture of Bart, my son, with Dave Grohl. My dad always goes on about it like ‘you better keep a scrapbook because none of his school friends are going to believe all of the stories he tells’.

It’s no secret that the music industry can be hard to get into. Do you have any advice for people trying to get their big break?

You’ve got to make music that you believe in. You’ve got to have stubborn self-belief that you’re good enough to do it and then just not stop until it happens. I think the biggest mistake people make is joining bands to try and make it and not actually enjoying music. They make things they think people want to hear. When really for us when we started making music that we wanted to hear, we thought no one else would be into it. That’s when it worked. If you believe in something enough then someone else will end up believing in your belief.