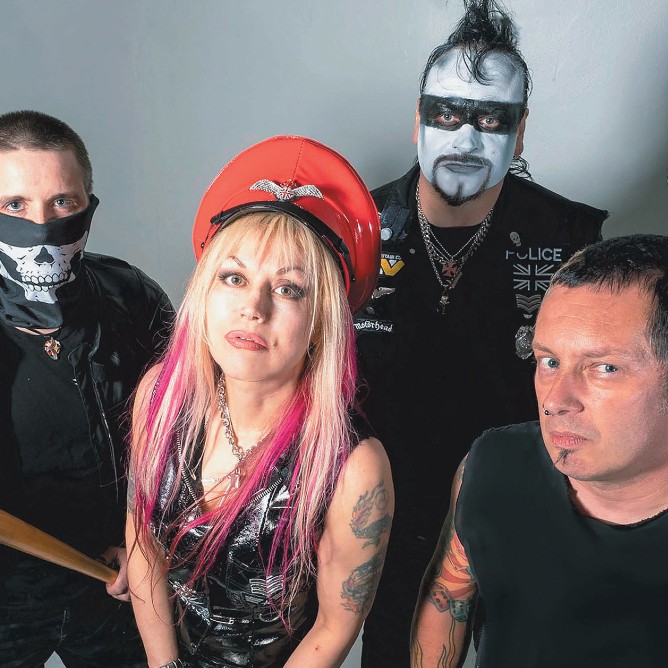 With 40 years as a professional musician under her belt, Beki Bondage has seen it all, from hanging out with fans in the 80’s punk scene to them sliding into her DMs. Her band Vice Squad have honed in their live performance and turned to a DIY approach to making music in order to evolve with the times. We spoke to Beki about changes in music making and performing, the importance of her rig and what this means for their latest album – Battle of Britain.

Vice Squad originally formed in 1979, over all these years what have been the biggest changes for you in music?

There’s far more interaction now but it’s via the internet rather than face to face. It used to be just hanging out with people after shows and signing stuff, but now it’s something that happens every day because people can contact you on various social media platforms. I’m actually quite reserved off-stage so it was quite strange for me at first!

How has your live show changed since the early days?

It’s become faster and louder but also more varied in some ways. It takes years of hard slog to become a confident performer and know which songs suit your voice and know the strengths and weaknesses of songs.

It’s a Marshall JCM 900 Hi Gain Dual Reverb 50 watt head and 4 x 12 Marshall cab, I got them from Eric Lindsay’s in Catford for the princely sum of £400 about 10 years ago. They’d made a mistake with the price on the website and forgot to add the cost of the cab but were good enough to let us have it at no extra charge. I occasionally use a Peavey 5150 but it’s usually the Marshall.

Our lead player Paul was trying to get me to use a modelling amp when recording a track for the album and was even asking me to choose between vintage mics and placements. After about 10 minutes I said that they all sounded wrong and insisted that we use my Marshall, which instantly sounded ‘right’ to me. I drive it quite hard live, it goes to infinity…….

Vice Squad have a DIY approach to making music. Is it a case of following a punk ethos or is it down to keeping control of your music and image?

A bit of both I think. It’s good to have control over your music and image but it does mean that you have to do all the work and take all of the financial risk. I have had to be tour manager, warehouse woman, accountant and lawyer as well as singer, songwriter and guitarist. Most of my time is taken up with non-creative things which is very frustrating sometimes.

Do you think this DIY approach is harder in 2020 than it was in the early days of Vice Squad or easier?

We weren’t DIY for very long in the old band. The original guitarist Dave Bateman booked the early gigs. We paid for the recording of our first single but after that we got management and signed to EMI. Over the years we’ve seen the best and worst of both approaches.

From a recording perspective it’s definitely easier to be DIY now. Home studios were few and far between back then so if you wanted a decent quality recording it was very difficult to do that with a DIY approach.

How did you write and record Battle of Britain? Did it require a different approach to other Vice Squad albums?

I think we’ve finally mastered the art of recording and production for this one, which is the main difference. Other than that we took the usual approach of writing and recording songs, keeping the ones that suited the album and discarding the others or using them for EPs. It’s actually quite difficult finding time to concentrate on recording and balancing that with booking gigs and running the band. You’d be surprised at how much trivia has to be dealt with just to get 4 musicians and a driver in the same place at the same time!

Some of the songs came very easily and we only struggled with one, ‘You Can’t Fool All Of The People’, which was initially a lot faster than the version on the album. It took me a while to find the right ‘feel’ for the voice. The final track ‘Pulling Teeth’ was great fun to record, I was trying not to laugh while singing the ‘Dithering Jibbering solid as jam’ bit and if you listen carefully you can hear bassist Wayne screaming ‘Aaarrrggghhhh’ in the middle eight! 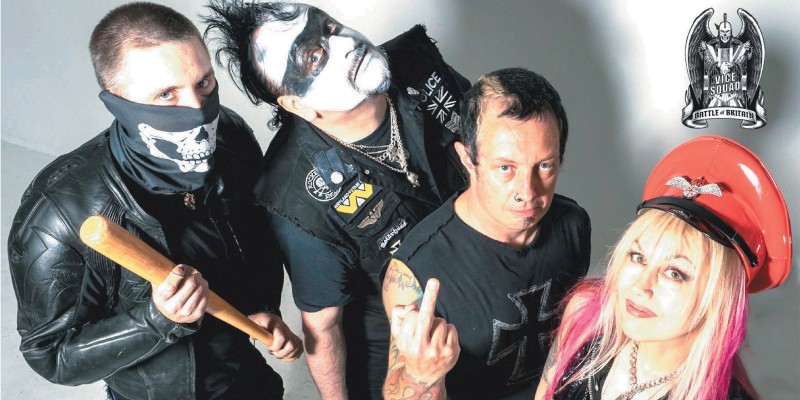 What’s the Beki and Lumpy Show and where did it come from?

It’s an unrehearsed, part-scripted mish mash of music, psychiatry, quizzes and comedy. A sort of sweary ‘Loose Women’ but more ‘Loose Marbles’! We have been showcasing other band’s videos as well as our own but that’s becoming difficult due to Facebook muting stuff, they even mute our songs and we own the copyrights!! We’ve done a Spinal Tap quiz, a Drummer Quiz (Hence the title ‘Disaster Mind’) and we’ve done Men’s Sweeney Fashion Tips and The Yorkshire Psychiatrist. It’s all good chaotic fun!

What’s next for Vice Squad?

We are recording a new album entitled ‘Vice-O-Lation’. The songs are weird and wonderful re-workings of previously released Vice Squad material like ‘Princess Paranoia’, ‘Water’ and ‘West End Stars’. We got very lucky with the video for ‘Princess Paranoia’ in that Paul filmed me miming to the song in my front room and our drummer Ant was able to edit in a 1930s Jazz band and grunge the whole thing up so it looks vintage. We started recording tracks during the first lock down and made a few videos at home, we’ve had a fantastic response.

We also have a surprise EP in the pipeline and we’re hoping to play a lot of the ‘Battle of Britain’ material live if/when live shows become possible!

...In the meantime check out Battle of Britain below.

Bad Touch talk classic tones to move your bones
Guitarists Seeks and Rob from Bad Touch shared their favourite rigs and what they used on their latest album 'Kiss the Sky'.
A Day In The Life of Jan Ozveren
Our second instalment of 'A Day In The Life' is here. Meet Jan Ozveren, the guitarist behind the chart-topping track 'Attention'.
Get Him To The Gear
Laurie Vincent dropped by our factory in Bletchley to get some new gear for his rig. Find out which amps caught his eye and what his band, Slaves, are up to for the rest of the year.
Catching up with You Me At Six
Marshall managed to grab a few minutes with Chris Miller and Max Helyer from You Me At Six to chat about getting started in music, what's next for the band, and of course, amps.
Behind the sticks with Siân Monaghan
Siân Monaghan not only drums for 5 bands but is also house player in a London venue, so when she dropped by HQ we made sure to quiz her on what led her to being a drummer in demand.
A day in the life of Oli Wiseman
The influential session drummer dropped by to pick up a new kit, so we grabbed a few minutes to talk gear, techniques and touring with pop sensation Anne-Marie.
A day in the life of Yungblud’s Michael Rennie
In the midst of Yungblud’s biggest tour to date we managed to grab a few minutes with drummer Michael Rennie to talk techniques, tips and touring.