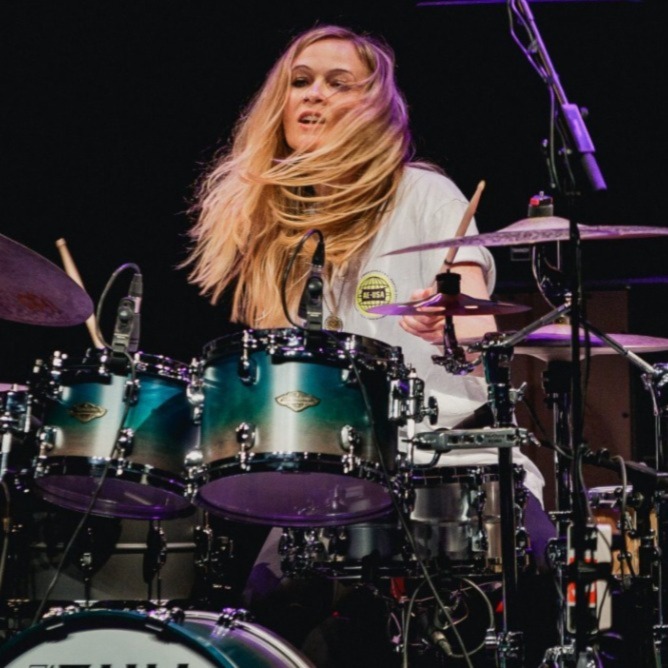 Regarded as one of the finest drummers in the modern industry, Anika Nilles is a drummer, composer and educator from Germany who specialises in progressive pop.

Within this article, we’re going to take a quick look at her relatively new but successful drumming career and identify some of the key skills that have helped her to break into the industry.

Born in 1983 in Aschaffenburg, Germany, Anika was born into a family full of drummers. Her two uncles, one cousin and father are all drummers, so her picking up the sticks was almost written in the stars. She started drumming at the age of 6 when her father started teaching her after spotting her keen interest in playing.

Anika continued drumming through her school life and went on to have a career in social education before stepping down to pursue her drumming career full time at the age of 26. She applied to study Popular Music at the Popakedemie Baden-Württemberg and earned herself a scholarship in her second year for extraordinary and outstanding performance. After completing her degree, Anika started doing her own drum clinics and since then, she has taken the drumming world by storm and hasn’t looked back.

She released her first track “Wild Boy” in 2013 along with a follow-up track “Alter Ego” in 2014. These videos got millions of views on YouTube and helped Anika gain global recognition, which led to her being booked for clinics all across Europe, America and China. as well as this, she received the ‘Rising star’ award in “DRUM!” Magazine in 2015 and 2016 and the ‘Up and Coming Artist’ award from Modern Drummer Readers Poll. Her debut album “Pikalar” came out in 2017 and was then followed by “For A Colourful Soul” in 2020, which were both performed with her full time touring band Nevell. More recently in 2022, Anika has released a new EP called “Opuntia” and is due to be joining Jeff Beck as his touring drummer on his UK and EU tour.

Anika currently uses Tama drums, in particular the Star Maple range having previously used the Starclassic series kits. Earlier in her career, she used the Mapex Orion range kit which can be seen in the videos for “Alter Ego” and “Wild Boy”. Anika likes to play with two rack toms and two floor toms in her setup, although she uses them in a slightly unusual order. She has her largest rack tom first with her smallest one after, this is because she often transitions from the larger tom to her floor toms and uses it more frequently in sequence than the smaller rack tom.

She also uses Meinl Cymbals, using a combination of Byzance Dry, Extra Dry and hand hammered cymbals. She also developed her own stack with the team at Meinl which features an 18” Byzance Thin Crash on the bottom and an 18” Trash Crash on top. Anika has also created multiple signature products including her Meinl Split Tone Practice Pad and her Promark Signature Drumsticks.

Anika’s playing style is very focused on her strong groove and use of odd rhythms. She tends to use groupings such as quintuplets and sextuplets over a 4/4 backbeat, and somehow manages to make it sound and look so effortless! Her smooth yet technically brilliant playing allows her to show off her ability behind the kit without stealing focus away from the song itself, which in itself is a great technique to be able to do.

She always plays with a smile on her face and manages to not only make the drum kit sound beautiful but also inspire many of the players who listen to her, and that’s why she is a drum icon.

The first step to getting your playing style similar to Anika's is to start mastering your sticking patterns. You can practice them here.

John Bonham
Undoubtedly one of the most iconic drummers of all time and an inspiration to generations of drummers. Let’s dive into the life and styling of the Led Zeppelin legend to see how this can inform your own playing.
Basic sticking patterns every drummer should know
Every pattern you play behind the kit comes from a drum rudiment, sometimes without you even realising.
Improve your drumming speed
We know, it’s not all about speed, but your overall dexterity around the kit that will help you perform the best. Here's our top tips and tricks to pick up the pace.
Snares to suit your style
Snare drums come in all different shapes and sizes, so we wanted to share what snare is best for each situation.
Drum kit setups for any situation
Be it reggae, rock, jazz, funk or anything in between, we’ve created this guide to help you configure your drum kit for every eventuality.
10 Handy Drum Accessories
The drumkit has stayed roughly the same for years, and for good reason. But what else is great to have alongside the basics?