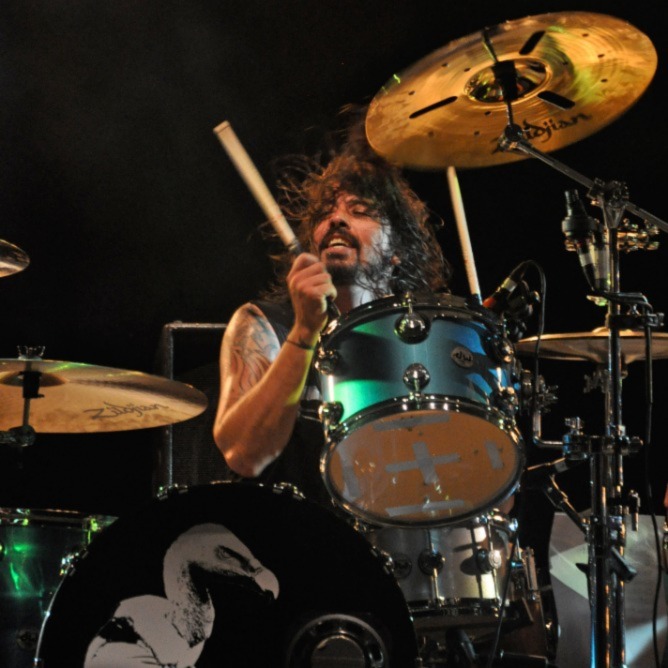 Regarded as the nicest guy in Rock and one of the most influential musicians of the last 35 years. In this article, we look into the life, career, and drumming style of the legendary, Dave Grohl.

David Eric Grohl was born in Warren, Ohio, on January 14th, 1969, before moving to Springfield, Virginia with his parents Virginia and James and older sister Lisa. Surprisingly, drums weren’t his first musical love; he began learning the guitar at the age of 12 but started teaching himself the drums after growing tired of lessons. It was a year later, whilst spending the summer at his cousin Tracey’s house, that he fell in love with Punk Rock music. She took Dave and his sister Lisa to a variety of Punk shows, and it was after their first gig, Naked Raygun at The Cubby Bear in Chicago, that they became ‘totally punk.’

Dave played in multiple bands throughout his schooldays, both as a guitarist and as a drummer. It was during his time in the band Freak Baby that he started teaching himself the drums and after a lineup reshuffle in the band, Dave switched over to become their drummer. Dave always cited John Bonham as his greatest influence as a drummer, with Rush drummer Neil Peart being another of his earliest influences. He used to teach himself by listening to Rush’s 2112 and other rock/punk records.

From then on, Dave played with bands such as Dain Bramage and Scream before making his big break when he joined Nirvana in 1990. When Grohl joined Nirvana, the band had already recorded several demos for the follow-up to their debut album Bleach. Dave made 2 studio albums with Nirvana, including their landmark second album Nevermind. The band disbanded in 1994 after singer Kurt Cobain’s death.

Following Nirvana disbanding, Dave took a brief turn with Tom Petty and the Heartbreakers. He was rumored to be a possible replacement for Dave Abbruzzese in Pearl Jam after playing a couple of songs with them during their March 1995 Australian Tour, although Dave decided to take a different path. He entered the studio and with him playing all the instruments, recorded a 15-track demo. This received serious interest from major record labels. Dave signed to Capitol Records, formed the band, and that was the start of The Foo Fighters and Dave’s career as a front man.

Thankfully this wasn’t the end of his drumming career, he played drums with Queens of the Stone Age and good friend Josh Homme on their 2002 hit album Songs for the Dead and their 2013 album …Like Clockwork. He also featured for Tenacious D on their albums The Pick of Destiny before working with Homme again when starting up alternative rock supergroup Them Crooked Vultures, featuring Led Zeppelin Bassist John Paul Jones. They played together for around a year and released their self-titled album in October 2009. Dave would also enjoy switching roles with Foo Fighters drummer Taylor Hawkins during their shows, primarily when they played Queen covers and Taylor took the reins on vocals.

Dave later joined DW Drums and used these when playing with Them Crooked Vultures. He switched up his sizes slightly, yet the 16”x24” bass drum stayed. He added an additional 16”x16” Floor Tom and switched to either a 9”x13” or 10”x14” Rack Tom.

Grohl wasn’t only influenced by John Bonham and his playing style but also by his kit set-up and the equipment that he used; following in his footsteps he used a larger 15” hi-hat to give his playing a fuller and deeper sound.

Grohl is well known for his use of Flams in his playing on tracks such as ‘Song for the Dead’ and ‘Scentless Apprentice’ but perhaps most recognizably on the introduction to ‘Smells Like Teen Spirit’ when those notable four flams loop along with the famous guitar riff seamlessly. During an interview with Pharrell Williams, Dave mentioned the heavy Disco influence with his drumming on Nirvana’s album Nevermind. Dave is quoted as saying “I pulled so much stuff from the Gap Band, Cameo and Tony Thompson on every one of those songs.”

One of Grohl’s most distinguishable playing aspects his aggressive playing style and even famously used his drumsticks the wrong way around to generate an even more powerful stroke.

There’s a reason why Dave is regarded so highly in the drumming world. Featuring on legendary album after legendary album, performing with heroes of the industry and just being a fantastic rock drummer, full of energy and power. And that’s why he is, a drum icon.