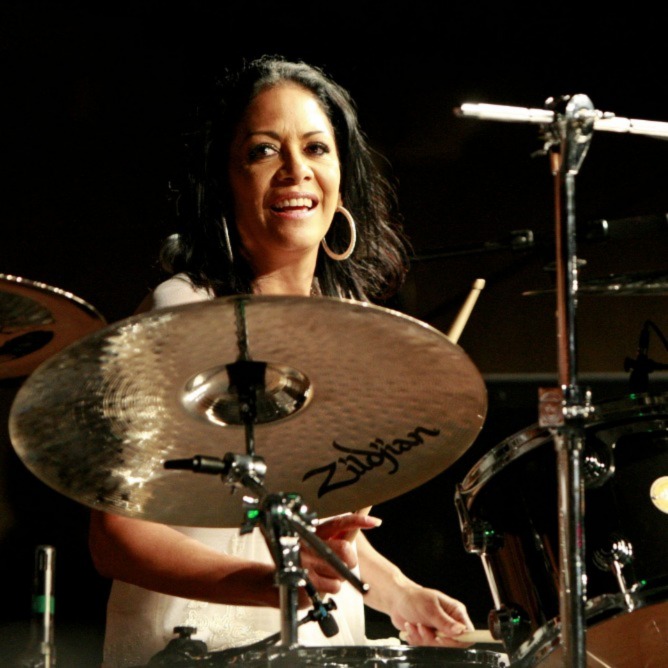 Sheila Escovedo, better known as Sheila E is an American drummer, percussionist and singer/songwriter. She’s best known for being the drummer and good friend of the legendary Prince.

Here we take a look into her life, career and the key skills that helped her to become the iconic player that she is today.

Born in Oakland, California in 1957, Sheila was born into a musical family and was surrounded by music from a young age. Her father Pete was a professional percussionist and was hired by Carlos Santana for his band Santana as well as leading the Latin big band Azteca.

When Shelia was just 3 years old, she developed a love for playing various musical instruments, feeling the most connected to the drums as well as other percussion instruments.

As a young child, she’d watch and copy the hand movements of her father as he played the drums—planting the seed for what would quickly become her life’s passion. At the age of 5, Sheila gave her first public performance for an audience of 3,000, appearing alongside her father. Shelia later said that it was whilst on that stage playing her drum solo that she realised she was going to be a percussionist.

By her early 20s, Sheila had already performed with the likes of George Duke, Lionel Richie, Marvin Gaye, Herbie Hancock, and Diana Ross. She joined The George Duke Band in 1977 and appeared on a number of Duke's albums between 1977 and 1980 such as ‘Don’t Let Go’ and his most successful album ‘A Brazilian Love Affair’.

She first met Prince in 1977 when she attended one of his shows in San Francisco. After the show Sheila went backstage to meet him. She put her hand out to introduce herself and before she could even speak, he said “I know who you are, I’ve been following your career for a long time. You’re an amazing drummer and percussionist.” From there their friendship blossomed and Sheila’s solo project was even invited to be the opening act on his Purple Rain tour.

In 1986, Shelia agreed to join Prince’s band, wanting to take a step back and ‘just play drums’ for a while.

She joined the band on their Sign O’ the Times Tour, where Prince famously proposed to her in the middle of their performance of ‘Purple Rain’. Sheila took the difficult decision to leave the band towards the end of the Lovesexy Tour, as the new music he was writing didn’t feel right with her.

Sheila uses all sorts of percussive instruments, such as Timbales, Congas and Cowbells. She primarily uses LP equipment, with who she has her own signature set of Wooden Timbales with.

It’s evident to see how much of an inspiration Sheila’s father, Pete Escovedo, was to her playing – he was not only her inspiration to start drumming but his Latin Jazz style has clearly influenced her throughout her career. She has previously stated that it wasn’t only her father who has had an influence on her career as a musician but also the rest of her family.

Most of Sheila’s beats match Latin tom/snare grooves with funk bass drums. Many of her most recognisable beats can be boiled down to rhythms that originate on a conga, before she brings them to a full drum kit to fill them out. If you listen to her solo work you will also notice that her other instrumentation and her vocals follow percussive patterns rather than overarching melodies, given her songs a unique flayour.

She plays with passion, precision and power. Her jazz and percussive influences allow her to play with speed and versatility, yet keeping things elegant and smooth. She ranges from playing Jazz all the way to Rock, and plays each to an extremely high level.

Anika Nilles
Take a quick look at Anika Nilles' relatively new but successful drumming career and identify some of the key skills that have helped her to break into the industry.
Basic sticking patterns every drummer should know
Every pattern you play behind the kit comes from a drum rudiment, sometimes without you even realising.
John Bonham
Undoubtedly one of the most iconic drummers of all time and an inspiration to generations of drummers. Let’s dive into the life and styling of the Led Zeppelin legend to see how this can inform your own playing.
Improve your drumming speed
We know, it’s not all about speed, but your overall dexterity around the kit that will help you perform the best. Here's our top tips and tricks to pick up the pace.
Taylor Hawkins
Take a look at the life, drumming career and skills that helped Taylor Hawkins break into the music industry.
Snares to suit your style
Snare drums come in all different shapes and sizes, so we wanted to share what snare is best for each situation.