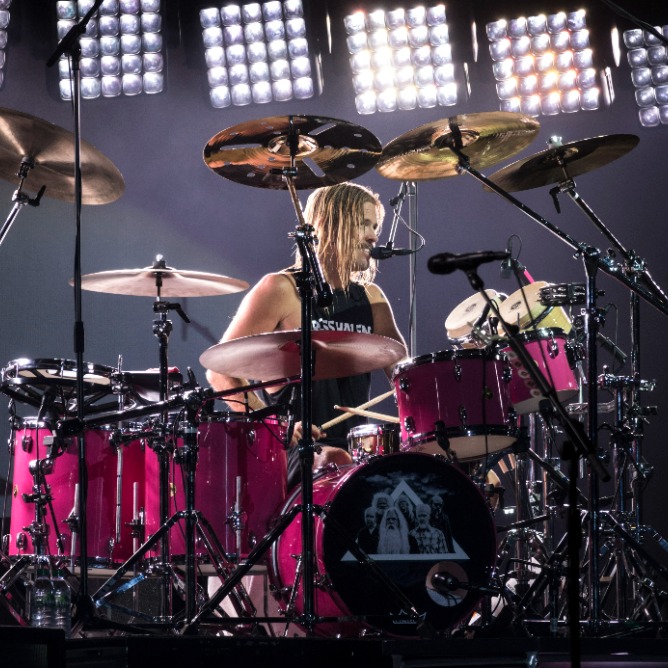 More than just a drummer, Taylor Hawkins was regarded as a modern-day powerhouse and one of the best players in the Rock and Roll scene.

In this article, we’re going to take a look into his life, drumming career and identify the skills that helped him break into the music industry.

Taylor was born on February 17th 1972 in Fort Worth, Texas before he and his family moved to Laguna Beach, California in 1976. He first started drumming around the age of 10, with him seeing Queen play at Irvine Meadows Amphitheatre in California being the catalyst. From then on Taylor was obsessed, with both Queen and the drums, and from that day he knew he wanted to be in a rock band.

As he got older Taylor briefly played with the band Sylvia before becoming the drummer for Sass Jordan on a European tour supporting Aerosmith. That was when he got his big break.

In 1995, off the back of her hit album ‘Jagged Little Pill’, Canadian American superstar Alanis Morissette recruited him to be her touring drummer for her 18 month album tour, along with him featuring in the music videos for “You Oughta Know”, “All I Really Want” and “You Learn”. It was during this tour that he met his musical soul mate, Dave Grohl. The tour with Alanis ended and he’d heard that Dave and Foo Fighters were looking for a new drummer, so Taylor enquired.

Dave initially thought that Taylor wouldn’t be interested in joining as Alanis Morissette was much bigger than the Foo Fighters at that time, but Taylor jumped at the chance due to his overwhelming desire to be in a rock band. It was from that point that the bromance between them began and on March 18th 1997 Taylor was announced as their new drummer.

Taylor and Foo Fighters worked together on 8 Studio albums, 5 of which went to Number 1 in the UK, along with numerous worldwide tours and festival headlines, such as the iconic Glastonbury Festival back in 2017.

But Taylor wasn’t always sworn to the Foo Fighters, he also enjoyed his side projects. He started his first side project, Taylor Hawkins and the Coattail Riders back in 2004 and released three studio albums with them between 2006 and 2019. He also formed a supergroup with Dave Navarro and Chris Chaney of Jane’s Addiction in 2020 and took on the roles of lead vocals and drums in both bands.

Hawkins was voted “Best Rock Drummer” back in 2005 by Rhythm Magazine and was inducted into the Rock and Roll Hall of Fame with the Foo Fighters in 2021 before he tragically died on March 25th 2022 at the age of 50, whilst on tour with the band in Bogota, Columbia.

Since 2005, Taylor had been an endorser of Gretsch Drums, having previously used Tama drums during his early days with Foo Fighters and DW Drums in his time with Alanis Morissette.

His most recent setup with Foo Fighters was a USA Custom kit, featuring a 9x13” Rack Tom, 16x16” & 16x18” Floor Toms, 18x24” Bass Drum and a 6.5x14” Bell Brass Snare Drum. Taylor has often incorporated Concert Toms and Roto Toms into his setup and would regularly use these when playing sequences or fills around the toms.

Taylor also used Zildjian Cymbals and had used them for most of his career. In his most recent setup, he used a mixture between 15" K Light Hi-Hats, 19" K Custom Hybrid Crash, 21" Avedis Sweet Ride and 20" A Custom EFX Crash. He also used Zildjian drumsticks, of which he had his own signature series pair of 5Bs.

In Taylor’s playing, it was evident to see who had a big influence on his playing when he was growing up. Whether it be the technical brilliance of Neil Peart, the accenting and fluidity of Stewart Copeland and the raw power of Roger Taylor, he had all the characteristics of some of the greats in the game and he really showed this in his live playing. His drumming was always a key element to the Foo Fighters, always providing a strong back beat and drive to their performances.

Taylor was a proper rock and roll drummer, he always kept you on the edge of your seat. He was a player that always gave 110% and didn’t just play drums, he put on a show! And that’s why he is, a drum icon.

The first step to getting your playing style similar to Taylor's is to start mastering your sticking patterns. You can practice them here.

John Bonham
Undoubtedly one of the most iconic drummers of all time and an inspiration to generations of drummers. Let’s dive into the life and styling of the Led Zeppelin legend to see how this can inform your own playing.
Anika Nilles
Take a quick look at Anika Nilles' relatively new but successful drumming career and identify some of the key skills that have helped her to break into the industry.
Basic sticking patterns every drummer should know
Every pattern you play behind the kit comes from a drum rudiment, sometimes without you even realising.
Improve your drumming speed
We know, it’s not all about speed, but your overall dexterity around the kit that will help you perform the best. Here's our top tips and tricks to pick up the pace.
Snares to suit your style
Snare drums come in all different shapes and sizes, so we wanted to share what snare is best for each situation.
Drum kit setups for any situation
Be it reggae, rock, jazz, funk or anything in between, we’ve created this guide to help you configure your drum kit for every eventuality.