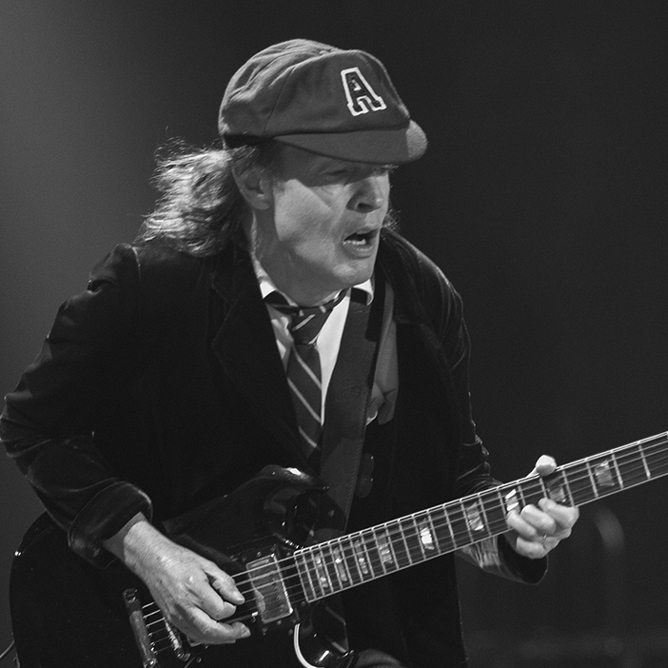 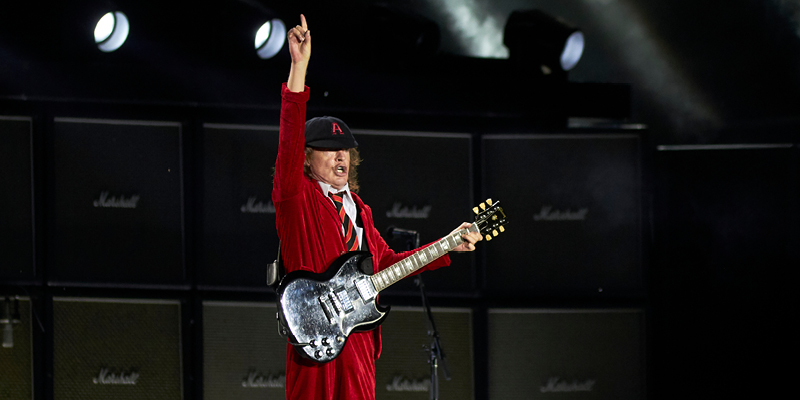 Angus started his journey into guitar when getting hold of a cheap acoustic purchased second-hand. He eventually got a Gibson SG in 1970 and played it until it had wood rot from so much sweat! After playing in different groups he eventually began AC/DC with his brother, Malcolm, in 1973. The name AC/DC came from seeing the phrase on the back of their sister Margaret’s sewing machine.

Angus Young is a ferocious guitar player. His style combined with an iconic schoolboy stage outfit brought AC/DC to the spotlight, who formed in 1973 and released multiple albums through the 70’s, 80s and beyond. Their album ‘Back In Black’ received both commercial success and critical acclaim, selling 50 million copies. Since the 70s the band have regularly toured across the globe and have also been inducted into the Rock and Roll Hall of Fame.

Angus is synonymous with Gibson SGs in different forms, in particular 68-70 SG standards, and Angus even has his own Gibson signature SG based on this model. In terms of amplifiers he’s relied on Marshall full stacks throughout his career. Primarily using a 4-input 1959 Super Lead 100 Watt Plexi head, JTM50 and 1960AX/BX cabinets, loaded with Celestion G12-65 speakers.

He’s also used the JMP2203 on ‘Let There Be Rock’ with Celestion G12M speakers. Angus Young uses very little in terms of pedals, but one that has become synonymous with him is the Schaffer Vega Diversity System, a wireless system that contains a preamp which adds colour and thickness to his sound

"I EVENTUALLY CAME TO THE CONCLUSION THAT THE MARSHALL 100 WATT STACK WAS THE BEST WAY TO GO."

As many others did in the 60’s/70’s, Young was influenced primarily by blues guitar players such as B.B. King and Chuck Berry. This style led him to learn different blues licks in the major and minor pentatonic scale. Learning different blues licks in the major and minor pentatonic scale. Many AC/DC songs gravitate towards power chords in the root and fifth position. A stereotypical AC/DC riff would be focused around the chords E minor, G, A and the pentatonic scale in the first open position. Hammer-ons are super important to nailing Angus’ style (see: Thunderstruck below, sometimes played with just the left hand, or both) but the most important aspect of his playing is the power and energy he expresses. Huge power comes from his picking hand and he’s not afraid to hit a huge chord.

Jimi Hendrix
When you think electric guitar, Jimi Hendrix will usually spring to mind. We look into the history, playing style and use of equipment that are now so crucial to music history.
Eric Clapton
Eric ‘Slowhand’ Clapton has been inducted into the Rock & Roll Hall of Fame, but what’s the history, gear and playing style behind the music?
Stevie Ray Vaughan
Arguably one of the most prolific, inspiring and often imitated guitar players of all time, we look at what made Stevie Ray Vaughan an icon.
B.B. King
The King of Blues spent 70 years performing his unique blues with his trusty guitar Lucille by his side. We explore how he stood out.