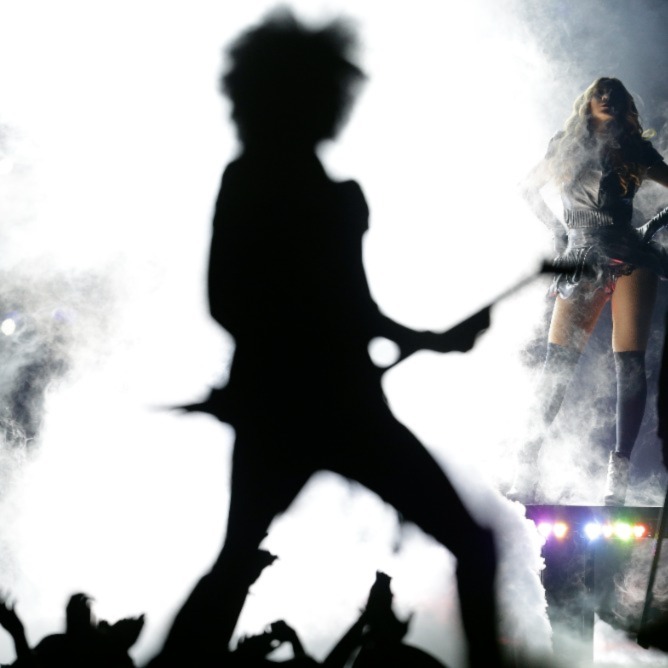 Born in Denver, Colorado, Bibi McGill is a guitarist, yogi, producer and DJ. Probably best known as being the lead guitarist and musical director of Beyoncé's backing band, the Suga Mamas. She also has worked with P!nk, Paulina Rubio and Chilean rock group La Ley. 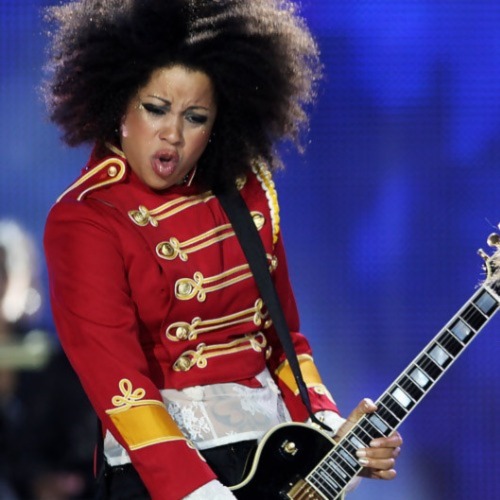 McGill began playing guitar after her father witnessed her pretending to play guitar with a pool stick, causing him to enrol her in private lessons aged 12. In an interview with the Denver Post, McGill's mom recalled her playing guitar in the style of blues musician B. B. King. McGill went on to attend and graduate University with a degree in music scoring and arranging, but it was then that she noticed that there were limited opportunities in the music scene in Denver. This meant Bibi made the decision to move to Los Angeles where she began playing gigs in small clubs such as The Whiskey and The Viper Room.

In the late 1980s, McGill was a part of a Christian metal band called Ezra. In 1988, they released a demo titled The Choice. In 2001, she was hired by Pink for her promotional tour and appeared with her on Saturday Night Live, The Tonight Show and Top of the Pops - among others. Along with this she appeared in Pink's music video for Don't Let Me Get Me. From the years of 2003 to 2005, McGill toured with the Chilean Rock group La Ley. It was with La Ley that she was given the opportunity to perform at the Vina del Mar International Song Festival in 2005.

After touring for years, McGill decided to give it all up and live a peaceful life. That was until 2006 when Beyoncé was looking for an all-female band to empower her young female audience. After encouragement from family members McGill decided to audition and later ended up becoming the lead guitarist for Beyoncé’s band, the Suga Mamas.

Playing for Beyoncé gave Bibi some incredible opportunities including playing at the Grammys, the Super Bowl Halftime Show in 2013 and Glastonbury Festival in 2011. McGill was also fortunate enough to play at the White House for Barack and Michelle Obama at a birthday party.

After McGill's last tour with Beyoncé, the On The Run Tour in 2014, she decided to focus on other things that she is passionate about. One of those passions is teaching yoga.

Throughout her career Bibi has been sponsored by Gibson and has used Les Paul’s from 2001-2013. Alongside using Les Paul’s McGill has also been known to play a Gibson SG standard with a Stetsbar Tremolo system while playing for Pink, and also a Flying V. In 2013, she played a Randy Rhoads Jackson signature at both the Super Bowl and Mrs. Carter Show World Tour. More recently McGill has used Japanese FGN, Fender, and ESP guitars.

When performing with Beyoncé she used Line 6 modeller amps which allowed for a clean stage to make room for big, choreographed performances. She uses Quilter Amps and analogue pedals, including a Chase Bliss Tonal Recall delay, Strymon Blue Sky reverb and TC Elctronic Corona chorus when in the studio. In 2017, McGill began a sponsorship by D'Angelico guitars.

Bibi McGill has always had a recognisable aggressive, funky and soulful rock style of guitar playing that has been often compared to Jimi Hendrix and Randy Rhoads.

She grew up listening to Earth, Wind, and Fire and The Isley Brothers, when she branched out into rock, she began listening to bands such as Led Zeppelin, Heart, The Eagles, Black Sabbath, and Iron Maiden. This is evident in her playing and her ability to effortlessly switch between differing styles.

McGill has listed Randy Rhoads as her main influence for her style and has claimed that he is her all-time favourite guitarist.

Jennifer Batten
Jennifer Batten famously played for Michael Jackson as well as Jeff Beck. Take a look at her upbringing, gear used, and unique playing style.
Joan Jett
Joan Jett, best known for her work as the frontwoman of her band Joan Jett & the Blackhearts, and for earlier founding and performing with the Runaways.
Sister Rosetta Tharpe
As ‘The Godmother of Rock & Roll’, Sister Rosetta Tharpe had an enormous impact on the guitar world with her contributions.
St Vincent
We take a look at the history, playing style and gear used by influential guitarist Annie Clark as part of the Grammy award winning St Vincent.
Yvette Young
A truly distinctive player, Yvette Young of COVET combines piano-style chord tapping with unique chords and heavenly tunings.
Prince
In this article we take a look at ‘The Purple One’s history, playing style and the equipment he used throughout his career.
B.B. King
The King of Blues spent 70 years performing his unique blues with his trusty guitar Lucille by his side. We explore how he stood out.