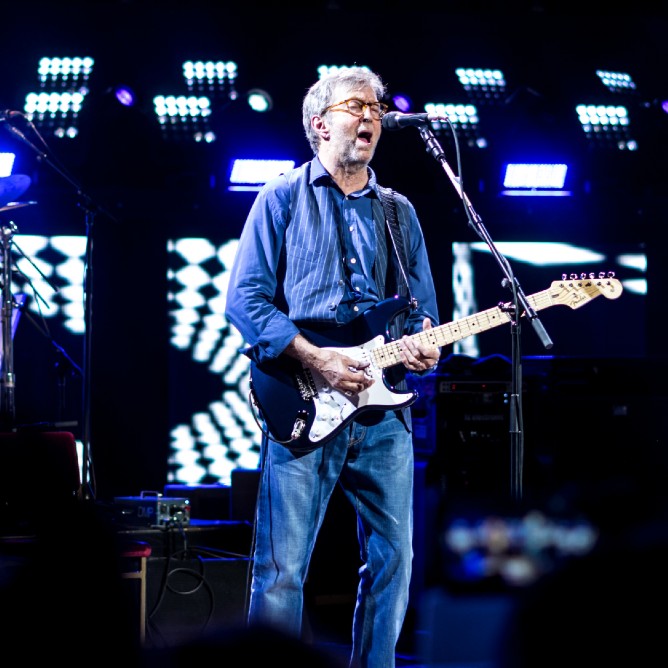 Eric Clapton’s playing style and musical contributions over the years have seen him inducted into the Rock and Roll Hall of Fame and cemented his position as one of the most legendary guitarists of all time. in this article, we go through Clapton’s musical history, his playing style and the gear he used to make those iconic tracks.

Clapton was born in Surrey, England and received his first guitar on his thirteenth birthday. After a few years of trial and error he found a love for blues music and began practising many hours of the day. After school Clapton began busking and later performing around pubs in Surrey and in 1963 joined The Yardbirds, a blues-influenced rock and roll band. Inspired by Chicago blues players such as B.B. King and Buddy Guy, Clapton used these influences to develop his own personal playing style and The Yardbirds began to attract a large, cult following.

When the band began moving towards a more commercial pop sound, Clapton swapped his Telecaster out for a Les Paul and a Marshall and joined John Mayall & The Bluesbreakers. Clapton wanted a combo amplifier that would fit in his car, which after a conversation led our founder Jim Marshall to create a more portable JTM45 amp. The result is our 1962 combo amplifier which was affectionately given the nickname Bluesbreaker. Clapton later went to create music history with his Marshall amp thanks to memorable solos on tracks such as Steppin' Out and Hideaway.

After leaving the band, Clapton was invited by drummer Ginger Baker to play in his new band Cream alongside Jack Bruce. Cream gained huge commercial success and went on to sell millions of records around the globe.

Clapton also worked closely with The Beatles and performed on various tracks with the band, with arguably his best known Beatles collaboration being While My Guitar Gently Weeps. He also worked with each member of the band on seperate solo projects.

After Cream disbanded, Eric went on to perform in the bands Blind Faith and Derek and the Dominos, which is where he penned the hit song Layla (inspired by his infatuation with George Harrison's wife Pattie Boyd).

In the late seventies, following personal struggles with addiction Clapton began his solo journey and spent the eighties performing with a huge variety of musicians. Following a personal loss in the nineties Clapton penned the emotional acoustic ballad Tears In Heaven which received six Grammys and sold over 10 million copies. Clapton also went on to create the periodic festivals/benefit concerts Crossroads, which is a celebration of guitarists and has become an extremely iconic event in its own right.

A look at Clapton’s history will show that his playing is genre-spanning and multi-faceted. His biggest inspiration and playing influence is blues music, citing Muddy Waters Robert Johnson and B.B. King as some of his biggest inspirations. His playing style has often been referred to as ‘smooth’ as Clapton could always brilliantly go from phrase to phrase in an effortless fashion.

Clapton's steady, precise phrasing and choice of using vibrato and bends at exactly the right times are key reasons behind him being recognised as a guitar hero. One common technique Clapton would also implement is a mixture of major and minor pentatonic scales in a lick - he commonly mixes them together by adding a major second interval into a minor pentatonic scale.

Clapton has used a wide variety of gear over the years, starting his journey with a telecaster and later a Les Paul, Clapton later became closely connected to Stratocasters, and most commonly played his 1950’s ‘Blackie’ which was made using parts from four different guitars. As mentioned previously Clapton had a good relationship with Jim Marshall and used a 1962 Bluesbreaker as well as a JTM45/Super Lead 100 during his years in Cream.

Clapton has always been very minimal with his use of pedals, focusing mainly on wah and fuzz pedals. To create classic Clapton tone we suggest using a JTM-45 or Plexi amp and pushing the volume to create real valve saturation (just make sure to use an attenuator and ear protection for home use!)

Stevie Ray Vaughan
Arguably one of the most prolific, inspiring and often imitated guitar players of all time, we look at what made Stevie Ray Vaughan an icon.
B.B. King
The King of Blues spent 70 years performing his unique blues with his trusty guitar Lucille by his side. We explore how he stood out.
Playing styles - Blues
No genre has had a greater influence than the blues. We look at where the blues began and what elements of blues are still prominent today.
Playing styles - Jazz
We've put this guide together showcasing how to play jazz guitar, the gear you need, and the artists to influence you.
History of 1962 bluesbreaker
The 1962 'Bluesbreaker' is a name that will be remembered forever. Discover how one humble amp became a legend.
How to make your solos sing
Standing out as a guitarist is tough, but a kickass solo can set you apart from the crowd.
Recording your guitar
Whether at home, in the studio or your practice space, we show you ways to get your guitar sounding great.