When you think electric guitar, Jimi Hendrix will usually spring to mind. One of the most influential and inspirational guitarists of all time and as quoted by our founder - ‘The best ambassador Marshall has ever had.’ We look into the history, playing style and use of equipment that made Hendrix so crucial to music history.

Born in Seattle Washington in 1942, James Marshall Hendrix picked up the guitar at 15, playing for hours every day, listening to blues musicians such as Howlin’ Wolf, Robert Johnson and Muddy Waters. Later he got hold of an electric guitar and started his own band before enlisting in the army. After being discharged, Hendrix moved to Tennessee and formed another band. Here he would play live circuits and perform as a backing musician for R&B and blues musicians. However, after struggling to make ends meet performing in different groups in different cities, he met Chas Chandler who brought him over to London in 1966. This is where The Jimi Hendrix experience was formed.

Hendrix wowed the crowd with a performance at The Bag O’Nails nightclub in London in front of Eric Clapton, John Lennon, Jeff Beck, Pete Townshend, Mick Jagger and more in attendance. He later signed a record deal and released iconic tracks such as ‘Hey Joe’, ‘Purple Haze’ and ‘The Wind Cries Mary’. It was these releases, along with his free-flowing rock/psych/blues sound and even setting his guitar on fire at the London Astoria, that solidified Hendrix as a music icon. The album ‘Are You Experienced’ peaked at Number 2 on the UK record charts and Hendrix went on to have multiple charting singles and albums.

By 1969 Hendrix was the world’s highest-paid rock musician and headlined the iconic and highly popular Woodstock festival. This performance has been quoted as 'the most iconic moment of the sixties' and live imagery often shows Hendrix stood among a vast, enormous wall of Marshall full stacks. Jimi Hendrix travelled back to England in 1970 and jammed with the band ‘War’ at Ronnie Scott’s Jazz Club 48 hours before his unfortunate and tragic death. 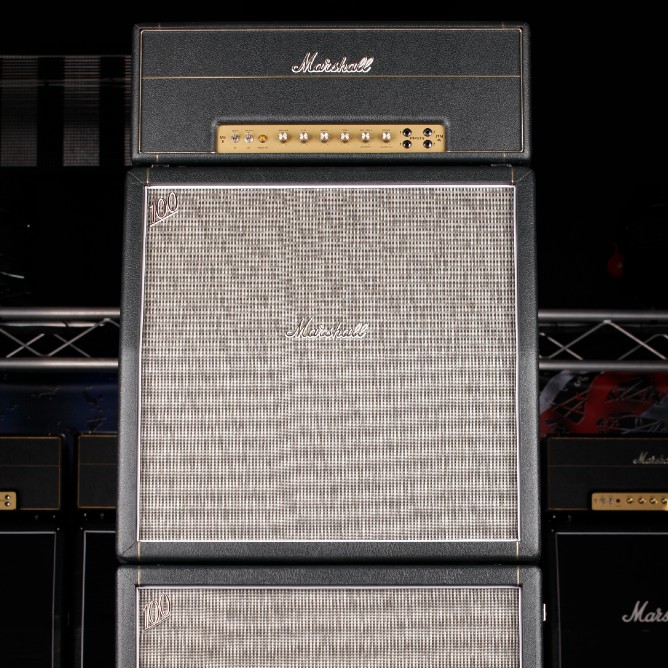 Hendrix had a ferocious, powerful signature sound with howling guitar solos that few could ever replicate. There were a few key factors to his signature style; firstly, his most commonly used guitar was a fender Stratocaster. Hendrix would play the guitar upside down as he was left-handed and flip the guitar strings. Due to the pickup positioning this gave him a brighter sound on the lowest string of the bridge pickup. Another factor and one of Hendrix’s signature effects was a Wah pedal. The opening riff of Voodoo Child is one of the most popular uses of a Wah pedal in modern music.

He would combine this with a Fuzz and an octave-doubling pedal alongside a Uni-Vibe, which emulates the rotating of a Leslie-type speaker. Hendrix was also one of the first to use stereophonic phasing effects in recordings. One effect that’s synonymous with Hendrix is his love for amp feedback. He would perform with a row of Marshall Super Lead 100 Watt full-stacks and was estimated to own between 50-100 Marshall amplifiers. Hendrix would visit Jim Marshall through drummer Mitch Mitchell and he would commonly ‘Dime the amp’ which resulted in him turning every knob to it’s maximum level. Resulting in that classic, saturated, overdriven sound.

Besides his love for Stratocasters, Marshall amps and fuzz/wah, Hendrix’s playing technique was just as unique as his tone. He would commonly use his thumb to fret the 6th string root note instead of bar chords, allowing him to play lines over the top of the fretted root note. He would also use double stops and open-string voicings to create truly unique phrases. For example, the use of the chord F#7#9 heard in Foxey Lady.

Eric Clapton
Eric ‘Slowhand’ Clapton has been inducted into the Rock & Roll Hall of Fame, but what’s the history, gear and playing style behind the music?
B.B. King
The King of Blues spent 70 years performing his unique blues with his trusty guitar Lucille by his side. We explore how he stood out.
Playing styles - Metal
A genre that has deep roots within Marshall, metal has taken on many different shapes and sizes over the years. We look into metal history, playing styles and the equipment used.
Playing Styles - Funk
The guitar has played a very crucial role in the development of funk. We’re going to talk through the history, playing techniques and gear used in funk.
The history of JVM
The JVM can do a little bit of everything. We look back at the origins of the series and see why it has become the ultimate all rounder for pro musicians.
In the studio
Common mistakes to avoid and how to make the most of your time in the studio.
Recording your guitar
Whether at home, in the studio or your practice space, we show you ways to get your guitar sounding great.