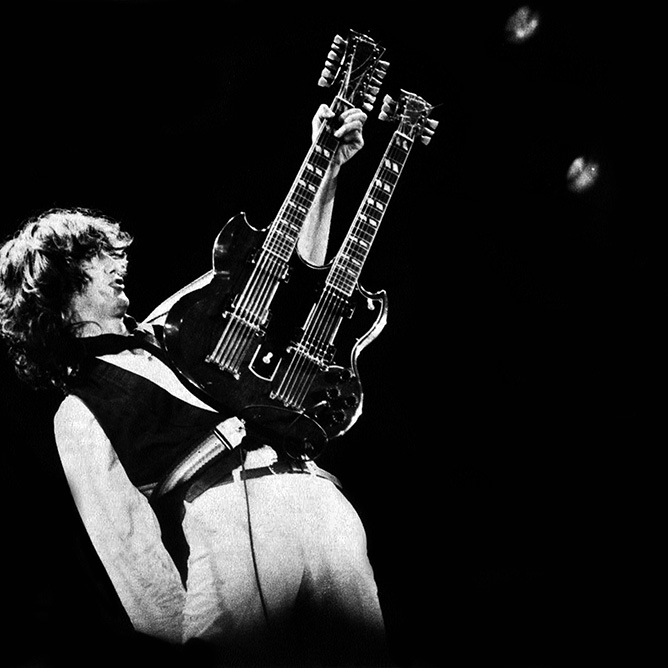 Riff king and rock revolutionary Jimmy Page has left as big a mark on music as any other guitarist in history. But what exactly is it that makes him so unique?

Born in West London in 1944, Jimmy Page spent most of his formative years in Epsom, Surrey. He first picked up the guitar after finding one that was left behind in a house his family moved to. He started to play at the age of 12, mentioning Elvis Presley’s song “Baby Let’s Play House” as the inspiration to do so. Jimmy had a handful of lessons, but mostly picked things up from friends or by ear.

In his early years of guitar Jimmy Page played a lot of skiffle influenced music and regularly busked around his local area, but he was also fascinated by science, claiming that he aimed to finish school and “to do biological research to find a cure for cancer.” He even went as far as to interview for a job as a lab assistant but in the end decided to leave school at 15 to forge a career in music, going on tour with Neil Christian and the Crusaders and performing on a handful of his recordings.

During this time Jimmy contracted glandular fever and had to quit touring to focus on his recovery. He enrolled at an art college in Surrey to concentrate on his love of painting, but after 18 months of recuperation then began to get regular work as a session musician. During the early 60s he performed on recordings by The Who, The Kinks, The Rolling Stones and Shirley Bassey, amongst many others. 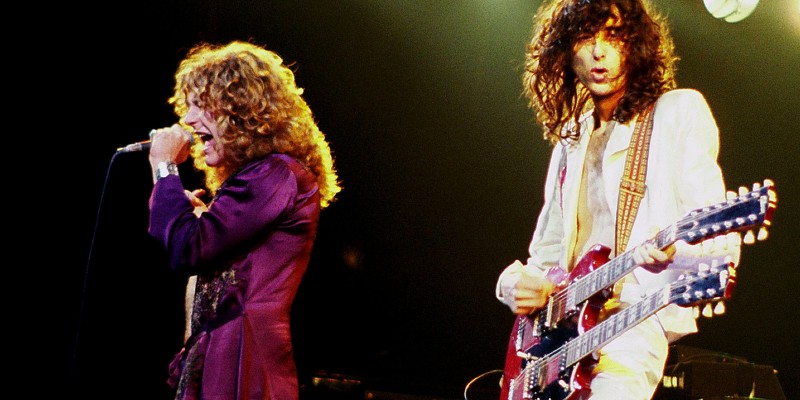 Around this time Page was also offered the opportunity to join the Yardbirds after Eric Clapton had left the band, but instead recommended Jeff Beck for the role. He would later play alongside Beck in the Yardbirds after Paul Samwell-Smith left the group, but more departures in 1968 left the band on a knife edge with some tour dates still fulfill. To solve this Page recruited Robert Plant, John Bonham and John Paul Jones under the name the New Yardbirds, before that became Led Zeppelin.

Jimmy Page’s idea was clear from the start, he wanted Led Zeppelin to be “a marriage of blues, hard rock and acoustic music topped with heavy choruses”. His iconic riffs are part of what made Led Zeppelin one of the best-selling bands in history, with an estimated 300 million album sales alongside multiple record breaking tours. The band were successful right up until they disbanded in 1980 following John Bonham’s death.

Since then Page has performed mostly for a range of personal and charitable causes, such as concerts for Multiple Sclerosis, Nordoff-Robbins Music Therapy, Live Aid, and the Action for Brazil’s Children Trust. 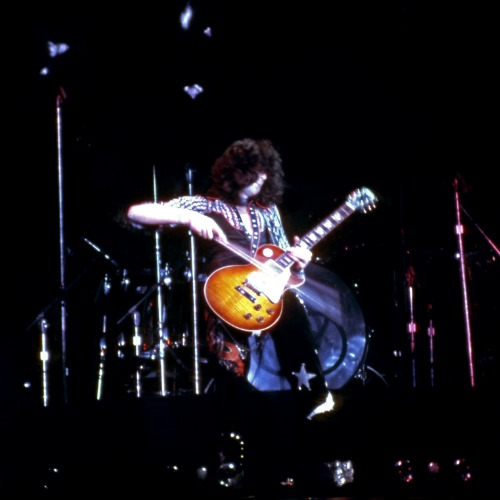 Jimmy Page is best known for his riff writing, most of which are based around minor pentatonic scales, such as Black Dog, Whole Lotta Love, and Heartbreaker, but which also incorporate timings from his early skiffle and boogie roots.

Page also experimented with many alternative tunings. Moby Dick is in drop D, whilst Kashmir is in DADGAD. Check out our article on alternative tunings for more info, and the video below. He is also known for using open G and open A, particularly on In My Time of Dying which also makes great use of a slide. For live performances he would even use a violin/cello bow to create a psychedelic sound.

Jimmy Page was also known for making good use of string bends to fill out the sounds of Led Zeppelin’s three-piece instrumental band, creating massive rhythm sounds. He also incorporated behind the nut bends in some solos and riffs, a technique that is rarely seen outside of country guitar playing. See the

Jimmy Page’s first electric guitar was a Futurama Grazioso, however he’s used far too many guitars since then to list here.

Perhaps the guitar most heavily associated with Page is his ‘59 Gibson Les Paul, which was sold to him by Joe Walsh. This is the guitar that was used on most of Led Zeppelin’s recordings and for large parts of live performances.

Another instantly recognisable Jimmy Page guitar is his ’59 Fender Telecaster, known as ‘the Dragon’ due to the dragon design Page painted on to the body. This was used during Page’s Yardbirds years and on the first Led Zep album. He was also well known for his use of a double necked Gibson EDS-1275.

When performing live Page primarily used Marshall JMP Super Lead amplifiers. In the studio his time working as a session musician freed him up creatively to try a wide range of equipment, including Vox, Fender, Orange, Supro and HiWatt amps alongside his trusty Marshall rig. His most widely used pedals and effects were a Sola Sound Pro MKII Tone Bender fuzz, MXR Phase 90, Dunlop Cry Baby and a Maestro Echoplex delay.