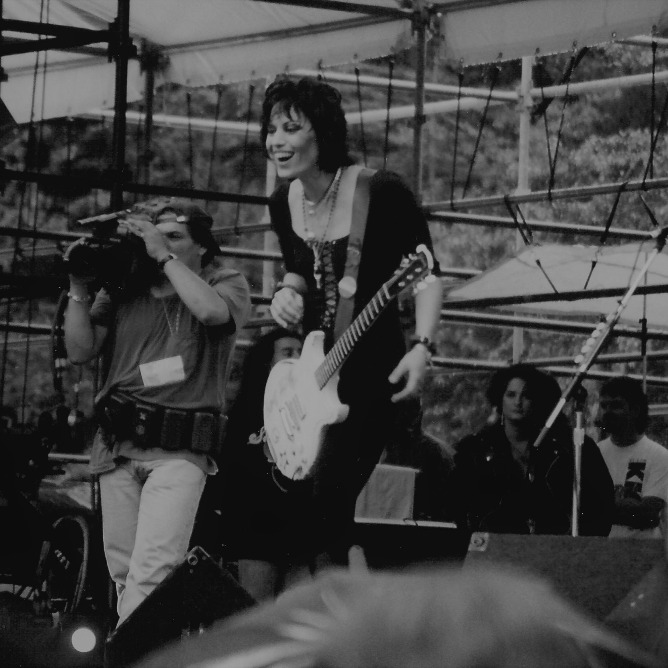 Joan Jett is an American rock singer, songwriter, composer, musician, record producer, and actress. Best known for her work as the frontwoman of her band Joan Jett & the Blackhearts, and for earlier founding and performing with the Runaways.

Born in September 1958, Joan Jett is an American rock singer, musician, composer, actor, and record producer. Jett began learning to play the guitar aged just 14 and was always determined to make a name for herself in the Rock scene.

Moving to Southern California, Jett’s musical career started to develop when she founded her first serious band, the Runaways. Foreshadowing Jett’s entire career, the Runaways weren’t your typical Rock band for the time. Composed of Jett on guitar and vocals, Sandy West on drums, Cherie Currie on lead vocals, Jackie Fox on bass guitar and Lita Ford on guitar, the public didn't seem to know what to do with five girls who sang about sex, rebelling and partying.

Despite the critics, in the US the Runaways continued to produce more music and soon released their second album ‘Queens of Noise’. An album that was very well received in Japan and ended up scoring the band three gold records.

A few years later in 1979, the Runaways decided to call it quits and Joan Jett chose to follow her musical dreams as a solo artist. The following year alongside producer Kenny Laguna, Jett founded her own record label, Blackheart Records. This accomplishment would make Jett the first female artist to own and have direct control over an independent record company.

With the audience still unsure about her rock-pop sound, Jett’s albums never seemed to reach huge levels of commercial success. However, from the age of 14, Jett knew what she wanted and she wasn’t going it let it go. She pulled together the album ‘I Love Rock ‘n’ Roll’ which ended up becoming a huge hit. It topped the pop charts in early 1982 and stayed there for seven weeks, with two more hit singles following later that year. 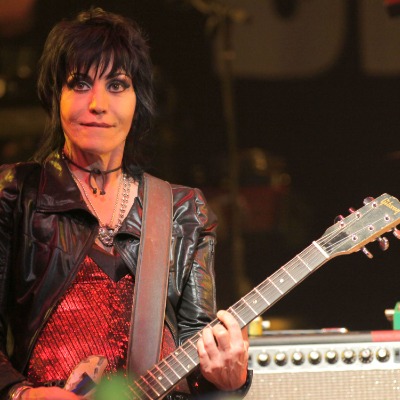 Joan Jett is most regularly spotted wielding a Gibson Melody Maker guitar. This guitar has been by her side since her days in the Runaways and features a single Red Rhodes Velvet Hammer humbucker. The guitar also has plenty of stickers, marks, and scratches from many years on the road.

She also often uses her 2011 Joan Jett signature Melody Maker electric guitar which accurately reproduces everything that makes her primary guitar so great. It features a single hot humbucker, lightweight body, and inbuilt kill-switch, just like the original. Both of her trusty axes have Velcro wrapped around the volume knobs, so they are grippy when performing live.

In terms of amps Joan Jett uses a Music Man HD-130 combo with 2x 12” Electro-Voice speakers. This amp uses JJ EL34 power tubes for its aggressive tone with the volume always on full. She also uses a Turbo Tube Screamer to achieve her instantly recognizable tone.

Joan Jett is often recognised for her incredibly tight rhythm guitar playing. By focusing her aggressive tones into a driving flow, she adds a powerful pulse to any song. She has previously said she would “probably have been a bass player if I hadn't played guitar. Basic barre chords became my thing. I'm not into difficult fingerings and style, I just like the feel of the guitar.”

She is left handed but uses right handed, which provides her with added dexterity when moving her left hand around the fret board. This comes in particularly helpful as Jett was uses punk-style power chords with quick changes.

Some of Joan Jett’s aggressive sound also comes using the serrated side of her sharkfin picks.

Jimmy Page
Riff king and rock revolutionary Jimmy Page has left as big a mark on music as any other guitarist in history. But what exactly is it that makes him so unique?
Yngwie Malmsteen
Take a look back at the incredible career of Swedish guitarist, songwriter, composer, and bandleader, Yngwie Malmsteen.
Chet Atkins
Chet Atkins is a revered Country musician. We check out how and why he has had a big influence on other players.
Joe Satriani
A virtuoso that needs little introduction. We dive into the history, gear and playing style of the guitarist and alien surfer.
Eddie Van Halen
We take a brief look into a guitar pioneer who inspired a generation with his unique sound and tapping techniques.
Yvette Young
A truly distinctive player, Yvette Young of COVET combines piano-style chord tapping with unique chords and heavenly tunings.
John Mayer
A songwriter that has navigated pop, blues and country. We look at the history, playing style and gear used by John Mayer.
Jennifer Batten
Jennifer Batten famously played for Michael Jackson as well as Jeff Beck. Take a look at her upbringing, gear used, and unique playing style.