Most famous for being a guitarist in Buffalo Springfield, Neil Young is a celebrated guitarist with multiple Grammy and Juno Awards. He has even been inducted into the Rock and Roll Hall of Fame twice. 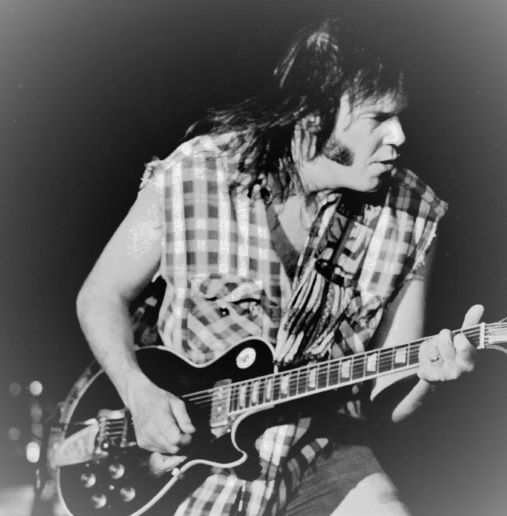 Born 12th November 1945, in Toronto Canada Neil Young had always showed an interest in music. From a young age he started playing a plastic ukulele, which then developed into a banjo, then the baritone ukulele.

Despite being the place where Neil first formed his own band, he always believed that school wasn’t for him and knew that he wanted to pursue a career in music.

After dropping out of school, Neil started a new band called ‘The Squires’ which consisted of himself, Ken Koblun, Jeff Wuckert and Bill Edmondson. The Squires, was a very successful local band, managing to play hundreds of different shows, in community centres, clubs and other local settings across Winnipeg. Three years later Neil decided it was time to leave The Squires and spent some time working in different venues around Winnipeg before finally becoming a soloist and touring Canada.

In 1966, Neil Young along with Bruce Palmer, Stephen Stills, Ritchie Dura and Dewey Martin formed Buffalo Springfield, who played a mixture of folk, country, psychedelia and rock music. The band were considered pioneering for their time and were even credited by The Rolling Stones for helping to define the genres of folk rock and country rock.

Despite using multiple pieces of gear throughout his career, Neil Young has always kept coming back to one particular amp. A tweed Fender Deluxe Amp 5C3, with the original valves replaced by two 6L6 RCAs instead. Neil has had this amp since the late 1960s and has helped him to deliver his iconic sound for decades.

Neil Young’s also had quite a collection of guitars. Amongst the collection there are two notable ones, 'Old Black' which was a 1953 Gibson Les Paul Goldtop, painted black and customised quite considerably. The other was a 191 Gretsch White Flacon. Guitar tech, Lary Cragg, has previously spoken about this guitar and stated that there are now only thought to be around 10 or 11 left in the world.

With a career spanning over 50 years, Neil Young has proved his musical talent across a range of genres stretching from country, to blues to grunge-like guitar; providing a fantastic source of playing styles to influence new generations of guitar players for years to come.

Bob Dylan, Elvis Presley and Chuck Berry highly influenced Neil Young's playing style. Neil has credited these three artists for their strong influence on his music as well as for shaping his love and appreciation for music in general.

Neil is highly influenced by everyday things and previous experiences to provide him with inspiration to create music. Pair this with his iconic guitar playing and high tenor voice and you’ve created his unique sound. Neil relies heavily on chords in his playing and uses them in the most creative ways. For example, he may sometimes switch between two chords and develop a riff-like effect, or subtly remove a finger to sound an open string. He also often uses slash chords within his playing or might add an extra note to make a voicing more interesting.

Neil's creative voicing of chords can be heard in the song below.

Eddie Van Halen
We take a brief look into a guitar pioneer who inspired a generation with his unique sound and tapping techniques.
Chet Atkins
Chet Atkins is a revered Country musician. We check out how and why he has had a big influence on other players.
Joan Jett
Best known for her band Joan Jett & the Blackhearts, and for earlier founding and performing with the Runaways.
Yngwie Malmsteen
Take a look back at the incredible career of Swedish guitarist, songwriter, composer, and bandleader, Yngwie Malmsteen.
Sister Rosetta Tharpe
As ‘The Godmother of Rock & Roll’, Sister Rosetta Tharpe had an enormous impact on the guitar world with her contributions.
Jeff Beck
Seen as one of the greatest of all time, we walk through the history of legendary guitarist Jeff Beck and look at his techniques and gear used.
B.B. King
The King of Blues spent 70 years performing his unique blues with his trusty guitar Lucille by his side. We explore how he stood out.