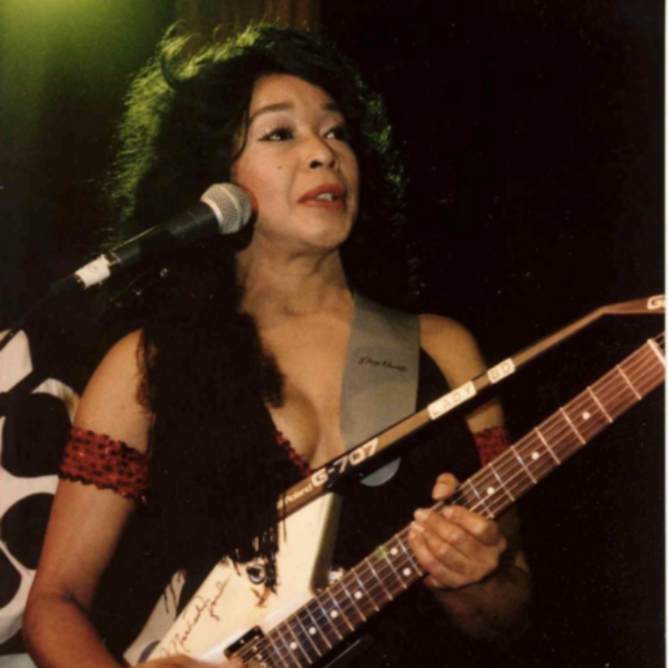 Born in Maryland, Peggy Jones (also known as Lady Bo or the Queen Mother of Guitar), is a guitarist who has gained recognition as being the first female rock guitarist, in a major rock band. Jones is most known for her relationship and involvement with Bo Diddley and his rock band. 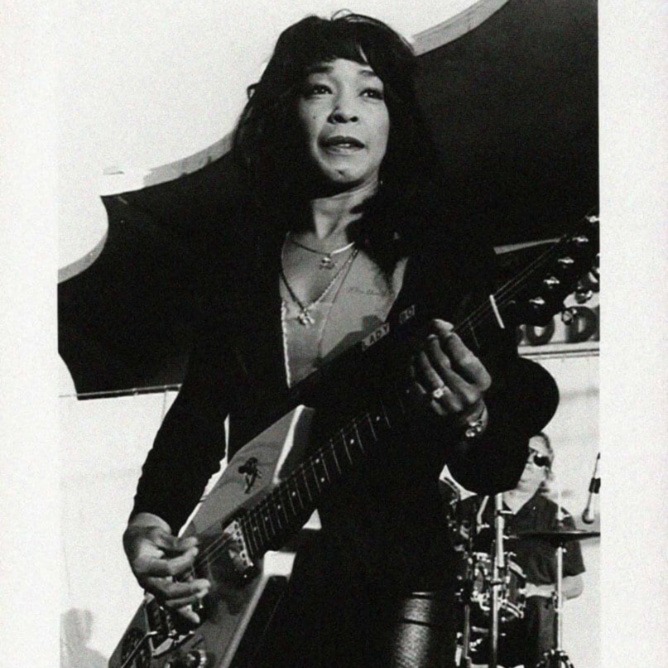 Growing up in the 1940's in the Sugar Hill section of New York, Jones attended the High School of Performing Arts in Manhattan New York, this helped to form her love of music from a young age and encouraged her to buy her first guitar aged 15.

Peggy’s music career started in 1956 when she joined a small local doo-wop group called The Bop Chords, who ended up separating in 1957. Following the separation of The Bop Chords, Jones joined the group she is most famous for – Bo Diddley’s band. It was in this band that she began to form her path as a guitar hero as she took on the role of both rhythm guitar and singer.
By the time the 60’s came around Peggy decided that it was time to focus on her solo career and in 1961 left Bo Diddley’s and focussed on her solo career with The Jewels. They went on to become a big top R&B band in New York and Boston’s club scene throughout the 60’s, before finally re-joining Bo Diddley’s in 1970 bringing The Jewels with her.

Throughout Peggy’s career, she has usually always used Gibson guitars, her most famous of which is the Gibson L6S; a descendant of the L5S Jazz solid-body electric guitar, with a 24 fret, two-octave neck. Jones is also known for playing the Roland Guitar Synthesizer GR-09 whilst in Bo Diddley’s band, which was used to experiment with sound. This synthesizer allowed Diddley and Jones to create a unique sound for their music, as the Gr-09 was not commonly used in blues.

Peggy Jones’ playing style is highly influenced by Bo Diddley and the unique sound he tried creating using innovative technologies. Bo Diddley also taught Jones all about open tuning and how by tuning your guitar slightly away from your standard tuning, you can create a whole new range of sounds. Peggy’s distinctive sound has been created due to her experimental attitude towards new effects pedals and guitars, to create new and innovative sounds.

Peggy Jones has been an influence for many female rock artists, including The Cramp’s lead guitarist, Poison Ivy, in an interview with Guitar World, Ivy explains how ‘the powerful woman onstage playing rock ‘n’ roll and oozing sex and style’ made an impact in her life.

Peggy Jones was a pioneer and frontrunner for many other women and rock guitarists trying to be noticed in the rock ‘n’ roll scene. Being considered inspirational by many people, so much so, that she was even hailed as the Queen Mother of Guitar, lands her firmly in our series of Guitar Heroes.