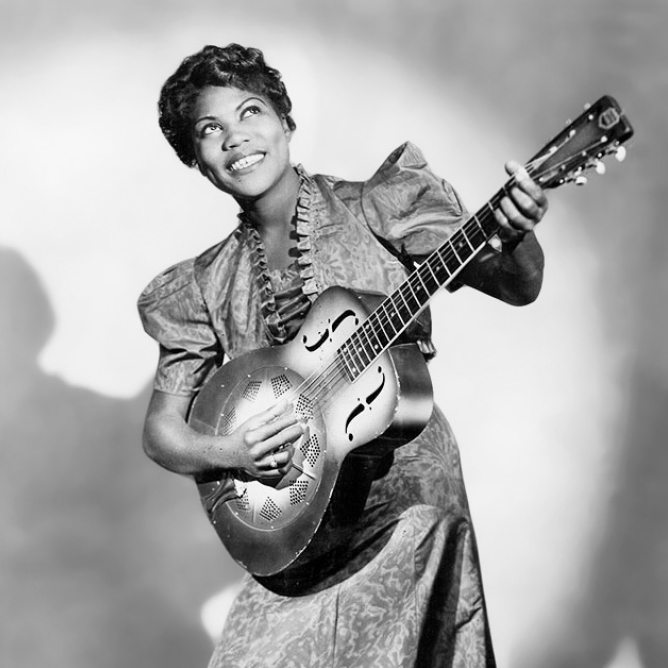 Famously labelled ‘The Godmother of Rock & Roll’ and for good reason, Sister Rosetta Tharpe inspired many other legendary guitarists. She made an enormous impact on the guitar world with her musical contributions, combining Gospel lyricism with upbeat rhythmic swing, creating an early version of Rock & Roll. In this article we look into her musical history, playing style and the gear she used to create her signature sound.

Born in Arkansas, USA in 1915, Sister Rosetta Tharpe was a daughter to two cotton pickers. Her father was a singer while her mother was a singer and mandolin player. She was also a women’s speaker at a local church. With her mother’s encouragement Tharpe began playing guitar at age four and by age six was performing in a traveling evangelical troupe.

Throughout her teenage years she performed regularly and was considered a musical prodigy. At age 23 Tharpe first began to record her music. At her first sessions she recorded four tracks, including ‘Rock Me’, which inspired the likes of Elvis Presley, Little Richard and Jerry Lee Lewis. From here Tharpe’s fame began to grow, leading to performances with Cab Calloway, Sammy Price, Muddy Waters and more over her career.

Tharpe’s performing career saw her make a name for herself in the Gospel, Jazz and early Rock & Roll communities. She performed well into the 1970s, including a now-iconic show in 1964 which saw Tharpe performing in Manchester on the side of a train platform with the audience seated on the other side.

Unfortunately, Tharpe passed away in 1973, but has been posthumously inducted into the Blues Hall of Fame. January 11 was declared Sister Rosetta Tharpe day in Pennsylvania.

Tharpe was involved with the very inception of rock and roll. She was later quoted saying “Oh, these kids and rock and roll — this is just sped up rhythm and blues. I've been doing that forever".

Her playing style was revolutionary and inspired almost every modern guitarist in their rock and blues style. She played fast in minor pentatonic shapes, a common Rosetta Tharpe sound would be to do multiple slides up in a phrase, sliding into the shape from the first fret.

Tharpe played a few different guitars but is most famously known for playing the Gibson Les Paul (SG) in white with 3 low-output PAF style humbuckers. She was one of the first to effectively use an overdriven sound by turning her small valve amp up as much as possible, and no pedals were used, due to them not existing at the time! Tharpe’s playing style was all about the power, charisma and confidence and the tone was very much in her fingers for the most part.

Jeff Beck
Seen as one of the greatest of all time, we walk through the history of legendary guitarist Jeff Beck and look at his techniques and gear used.
Prince
In this article we take a look at ‘The Purple One’s history, playing style and the equipment he used throughout his career.
Gary Moore
Gary Moore is one of the most iconic and highly revered guitarists. We take a look at the history, techniques and playing style of the blues guitar legend.
St Vincent
We take a look at the history, playing style and gear used by influential guitarist Annie Clark as part of the Grammy award winning St Vincent.
Angus Young
Angus Young is an Australian guitarist, known for his schoolboy-outfit, Gibson SG and duck-walking in the hard classic rock band AC/DC.
Jimi Hendrix
When you think electric guitar, Jimi Hendrix will usually spring to mind. We look into the history, playing style and use of equipment that are now so crucial to music history.
Eric Clapton
Eric ‘Slowhand’ Clapton has been inducted into the Rock & Roll Hall of Fame, but what’s the history, gear and playing style behind the music?
Stevie Ray Vaughan
Arguably one of the most prolific, inspiring and often imitated guitar players of all time, we look at what made Stevie Ray Vaughan an icon.
B.B. King
The King of Blues spent 70 years performing his unique blues with his trusty guitar Lucille by his side. We explore how he stood out.