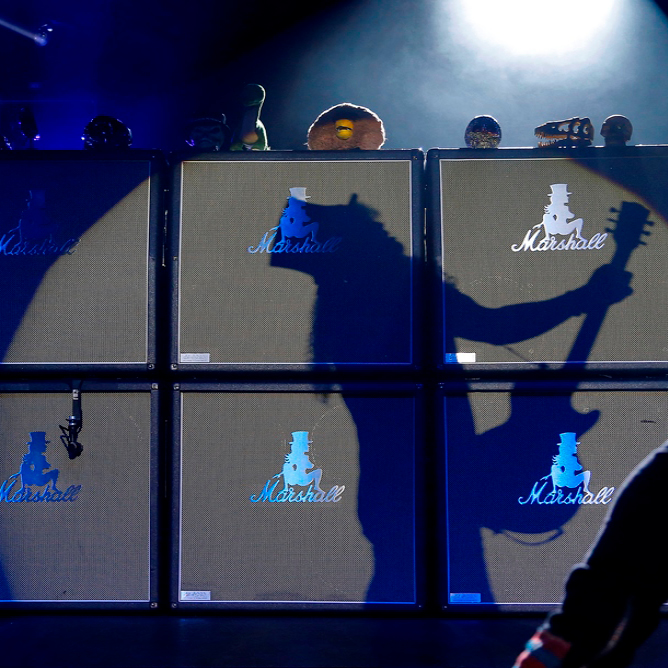 Undoubtedly one of the most legendary guitar players in rock music, we take a look at the history, playing style and gear used by the iconic Slash.

Born Saul Hudson in London 1965, Slash (a nickname later given to him by actor Seymour Cassel as he was always in a hurry) spent his first few years in England before moving to Los Angeles with his mother when he was 5. By 1979 he had begun guitar lessons after hearing “Brown Sugar” by The Rolling Stones. Hearing his school teacher play Cream and Led Zeppelin further influenced Slash and his heart was set on playing guitar.

By the early eighties Slash was playing in various bands and met bassist Duff McKagan. In 1985 Slash was asked by Axl Rose and Izzy Stradlin to join their band Guns N’ Roses, who at the time were playing LA nightclubs. Before one of the shows Slash bought a black felt top hat and Native American poncho belt from Melrose Avenue. The hat stayed with Slash, but the belt became synonymous with Axl and various versions have been sported on stage ever since.

The band wrote many of their classic hits such as ‘Welcome To The Jungle’ ‘Sweet Child O’ Mine’ and ‘Paradise City’ during 1985 and 1986. The band released their debut album ‘Appetite For Destruction’ in 1987 which has sold over 28 million copies to date. Following the success of their debut album they then released the album ‘G N’ R Lies’, followed up by the double album ‘Use Your Illusion’, which involved an almost 2 and a half year long world tour, such was the demand to see the band live. Guns N’ Roses final album of this period was the covers record ‘The Spaghetti Incident?’ before Slash left the band in 1996 after one too many disagreements with Axl Rose.

After leaving Guns N’ Roses Slash toured playing blues music with his collective ‘Slash’s Blues Ball’, and also toured and released music with his supergroup ‘Slash’s Snakepit’ through the late nineties. He then formed new band Velvet Revolver with Scott Weiland, formerly of Stone Temple Pilots, Dave Kushner of Wasted Youth, and Duff McKagan and Matt Sorum who had been part of Guns N’ Roses. Velvet Revolver released two albums, but when Weiland left to reunite Stone Temple Pilots in 2008 Slash began working on his first solo album. This was released the following year and contained collaborations with many artists including Ozzy Osbourne, Iggy Pop, Chris Cornell, Lemmy Kilminster and more. His second solo album ‘Apocalyptic Love’ followed in 2012, before Slash rejoined Guns N’ Roses for a huge ‘Not In This Lifetime’ tour in 2016 that spanned 175 shows. 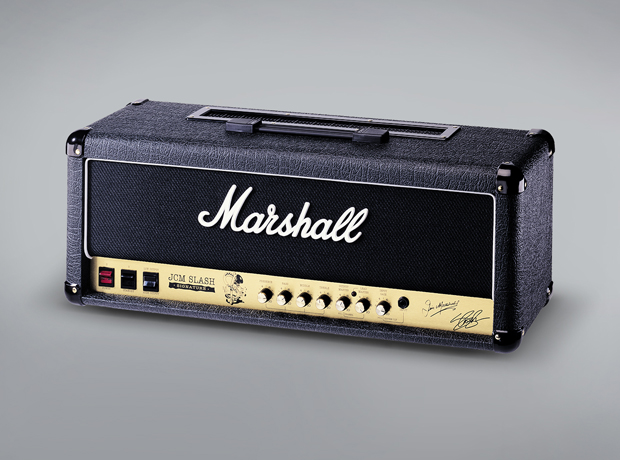 When talking equipment, it’s arguable that we don’t have a bigger Marshall advocate on our artist roster. Check out the podcast above to discover how Slash was introduced to Marshall. He has always been a big Marshall fan and most commonly uses Silver Jubilee heads, alongside his multiple signature models. The first signature model released was the 2555SL, which was made between 1995-1997. This amp was a Jubilee reissue with a classic JCM look to it. Inside was 100 Watts of power from 3 x 12AX7 preamp valves and 4 EL34 Power amp valves – more info on that amp here.

Following that, in 2010 the Slash Signature AFD (Appetite For Destruction) amplifier was released. This amp focused solely on the tones that were created when recording Appetite for Destruction. The amp is single channel but can move between JCM800 and 1959 tones easily with the stomp of a switch. It also features a built-in attenuator and self-biasing capabilities, making it an absolute must-have for serious Slash tone chasers.

For his live rig, Slash often uses original 1987 heads with EL34s for his dirty tone, connected to Marshall Straight 4x12 cabs loaded with Celestion Vintage 30's that are usually mic’d up off stage (with a separate cab for feedback that can be dialed in by his guitar tech). For his clean tone he usually uses Jubilee heads but with KT88 Outputs and an 12AT7 Preamp valve phase inverter. Slash also uses his JCM Slash 2555 signature along with his Signature Marshall AFD amp depending upon what the situation requires. In most live scenarios Slash will have up to 6 Marshall heads running!

In terms of guitars, Slash is well known for his vast selection of Gibson Les Pauls, with multiple signature models throughout the years. His preference leans on Seymour Duncan Alnico II Pro signature pickups, 1.14 Dunlop picks and .11-.48 gauge strings tuned to E Flat. He’s also known to play an EDS 1275 Doubleneck SG and vintage BC Rich guitars. Regarding pedals Slash would use a lot of Wah which he implements with a Crybaby Rack Wah, which allows him to have multiple Wah pedals on stage in different positions. Alongside that Slash uses CAE boosters, DD3/DD500 Delays and his signature MXR Fuzz.

"no other amps produce their sound."

There’s a few characteristics that make Slash’s playing style unique, firstly of which is his use of the pentatonic scale in solos. Slash commonly adds notes from the blues and natural minor scales into his pentatonic scale to give it some unique edge. He also utilises hammer ons and pull offs over alternative picking and in heavier solos uses a lot of double stops. Slash is also brilliant at controlling bends with great, balanced vibrato once the bend reaches pitch. 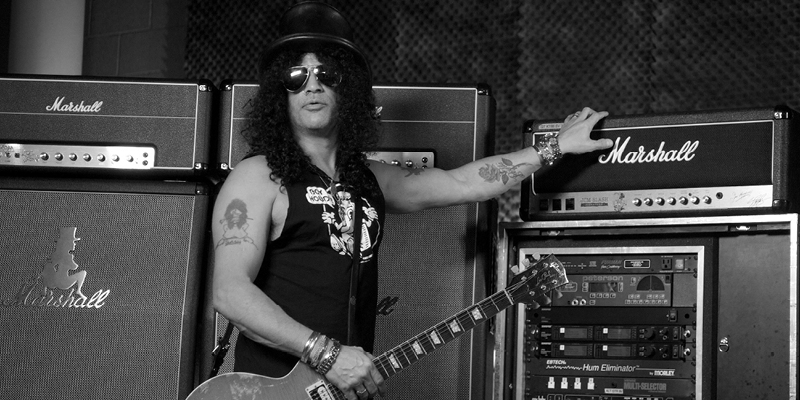 Prince
In this article we take a look at ‘The Purple One’s history, playing style and the equipment he used throughout his career.
Angus Young
Angus Young is an Australian guitarist, known for his schoolboy-outfit, Gibson SG and duck-walking in the hard classic rock band AC/DC.
Jimi Hendrix
When you think electric guitar, Jimi Hendrix will usually spring to mind. We look into the history, playing style and use of equipment that are now so crucial to music history.
Eric Clapton
Eric ‘Slowhand’ Clapton has been inducted into the Rock & Roll Hall of Fame, but what’s the history, gear and playing style behind the music?
Gary Moore
Gary Moore is one of the most iconic and highly revered guitarists. We take a look at the history, techniques and playing style of the blues guitar legend.
B.B. King
The King of Blues spent 70 years performing his unique blues with his trusty guitar Lucille by his side. We explore how he stood out.
Sister Rosetta Tharpe
As ‘The Godmother of Rock & Roll’, Sister Rosetta Tharpe had an enormous impact on the guitar world with her contributions.