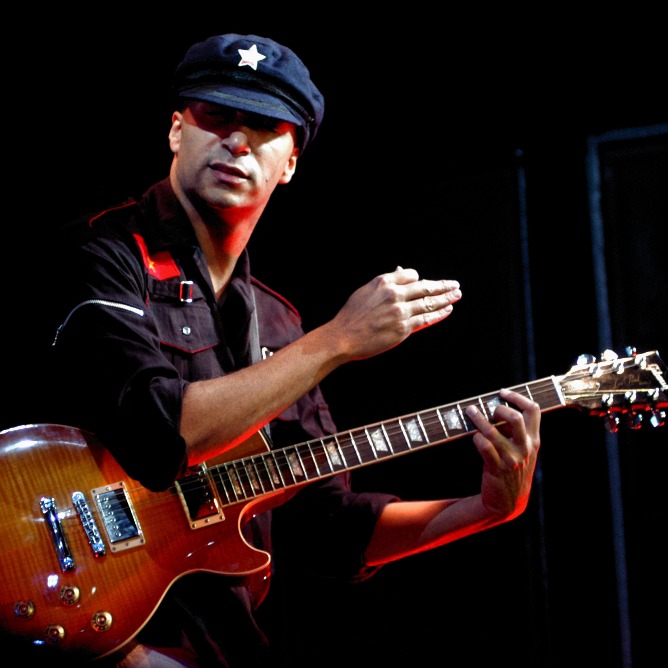 Tom Morello has been arguably one of the most influential rock guitarists in the 21st century. But what is it that makes his sound and style so unique?

Thomas Baptist Morello was born on 30th May 1964. He was raised by his mother and lived in Libertyville, Illinois. Growing up Morello always had a passion for both music and politics, and picked up his first guitar at the age of 13. As his feelings towards music began to grow Morello decided that he would start studying the guitar seriously, coinciding with him enrolling at Harvard University. At this time, Morello's musical tastes lay in the direction of hard rock and heavy metal, particularly, Black Sabbath, Kiss and Iron Maiden. Morello has previously claimed that Black Sabbath guitarist Tony Iommi was one of his biggest influences as a riff writer.

Despite being heavily influenced by punk rock bands and artists like the Clash and Bob Dylan, Morello developed his own unique sound and technique through the electric guitar.

Tom Morello is best known for his creative guitar playing style which combines feedback noise, unconventional picking and tapping, as well as incorporating a heavy use of guitar effects through pedals to give a truly unique sound. He also makes good use of a kill switch in various songs to rapidly cut the guitar tone.

He is equally as inspired by Run-DMC and Public Enemy as he is by Yngwie Malmsteen and Steve Vai, which can be seen when Tom described his role in Rage Against the Machine as “being the DJ in the band”.

Morello's unique technique and talent led to him being voted the fifth-greatest guitarist of the past 30 years in 2010.

Arguably, Morello's most famous guitar has been the mongrel custom "Arm The Homeless". The original guitar was custom-made and featured a Stratocaster body with a Performance Corsair neck, two Seymour Duncan JB pickups, and a chrome original Floyd Rose tremolo. However, since having the guitar just about everything has been changed numerous times and the only thing that remains from the original guitar is the body.

Following the theft of his music gear from a van, Morello decided to buy, and use, the JCM800 2205 50-Watt amp head. Although the amplifier has two channels, Morello only uses the overdrive channel and lowers the volume on his guitar to get cleaner sounds.

Morello also uses a Marshall Lead 20 Model 5002 20 watts Combo Amplifier. This particular amp was used to write and record the song "Tire Me", which would go on to win the first-ever Best Metal Performance award at the Grammy’s in 1997.

As mentioned before, Morello uses a lot of pedals to produce effects in his playing. Within RATM, he uses a Dunlop Cry Baby, a DigiTech WH-1 Whammy, a Boss DD-2 Digital Delay, a DOD EQ pedal (set flat and just used to boost the volume during guitar solos or particular rocking moments), and an Ibanez DFL Flanger. All his pedals are placed in the amplifier’s effects loop.

Angus Young
Angus Young is an Australian guitarist, known for his schoolboy-outfit, Gibson SG and duck-walking in the hard classic rock band AC/DC.
B.B. King
The King of Blues spent 70 years performing his unique blues with his trusty guitar Lucille by his side. We explore how he stood out.
Chet Atkins
Chet Atkins is a revered Country musician. We check out how and why he has had a big influence on other players.
Eddie Van Halen
We take a brief look into a guitar pioneer who inspired a generation with his unique sound and tapping techniques.
Eric Clapton
Eric ‘Slowhand’ Clapton has been inducted into the Rock & Roll Hall of Fame, but what’s the history, gear and playing style behind the music?
Gary Moore
Gary Moore is one of the most iconic and highly revered guitarists. We take a look at the history, techniques and playing style of the blues guitar legend.
Jeff Beck
Seen as one of the greatest of all time, we walk through the history of legendary guitarist Jeff Beck and look at his techniques and gear used.
Jennifer Batten
Jennifer Batten famously played for Michael Jackson as well as Jeff Beck. Take a look at her upbringing, gear used, and unique playing style.
Jimi Hendrix
When you think electric guitar, Jimi Hendrix will usually spring to mind. We look into the history, playing style and use of equipment that are now so crucial to music history.
Jimmy Page
Riff king and rock revolutionary Jimmy Page has left as big a mark on music as any other guitarist in history. But what exactly is it that makes him so unique?