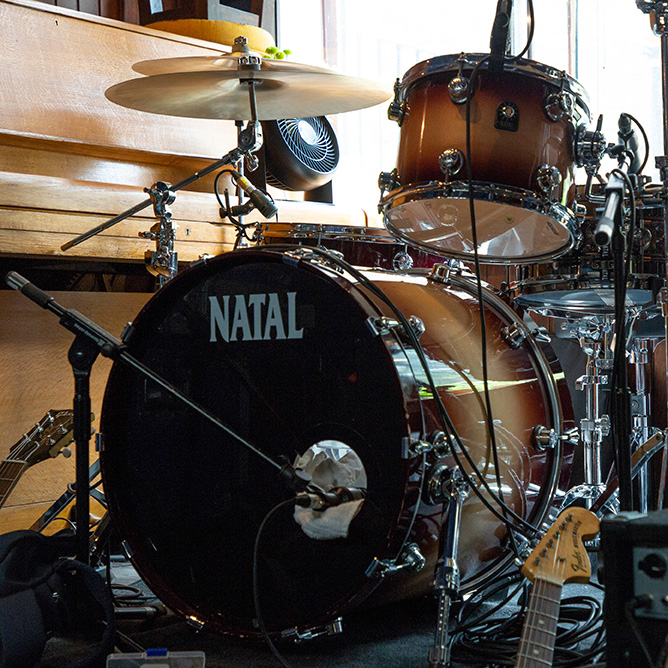 Also referred to as a kick drum, this is a large drum that sits on the floor and played using a bass drum. It is supported by bass drum spurs.

A boom stand is a type of stand that allows you to attach cymbals to your drum set up. The boom arm, the section that extends away from the bass, provides flexible positioning compared to straight stands.

A drum badge is a label attached to the drum shell which either displays the Natal logo or the kit log.

Also known as a drum skin, is the material stretched over the open end of a drum.

Sometimes referred to as a drum stool, this is the seat designed for you to use while playing. Most drum thrones can be adjusted to your comfort.

This is the part of the kit used to position or support the drums.

A hi-hat is a pair of cymbals that sit on the same stand and are operated by a foot pedal.

The hoop is the ring of wood or metal that fits around the shell and the drum head. We often use triple-flanged as they result in a more sustained tone.

Lugs are a fitting attached to the drum shell that the tension rods screw into.

This is a term used the describe how deep and full a sound is.

A snare is a stretch of wire attached to a drum head that produces a rattling sound. A snare drum is a drum fitted with many of these snares that

a distinct crack or rattling sound.

These are the legs often found on a bass drum that holds the instrument in place and prevents unwanted sideways or forward movement.

Sustain describes the amount of time it takes before a sound becomes inaudible. Sounds with greater sustain are audible for long.

Sometimes referred to as tuning screws, tension rods are threaded bolts that screw into the lugs on one end and fit around the drum hoop on the other end. They allow the drum head to be tightened or loosened to achieve the desired pitch of the drum.

Toms are cylindrical drums that don’t feature snare wires. The sound varies depending on the size of the drums. Rack toms produce high to midrange tones due to their smaller and shallower size while floor toms are larger and produce deeper, resonant tones.

The snare throw or throw-off is a mechanism that moves the snares closer to or further away from the drum head. The Tri-Throw mechanism was developed by Natal to give players three options for engaging the snares. When ‘off’ the snares are moved away from the head and the drum will produce more of a tom sound than that distinctive crack. When ‘on’ the snares are in their tightest position and produce that signature snare drum sound. The third option of ‘half’ allows the snares to be relaxed but not loose so it produces a mild snare drum sound.