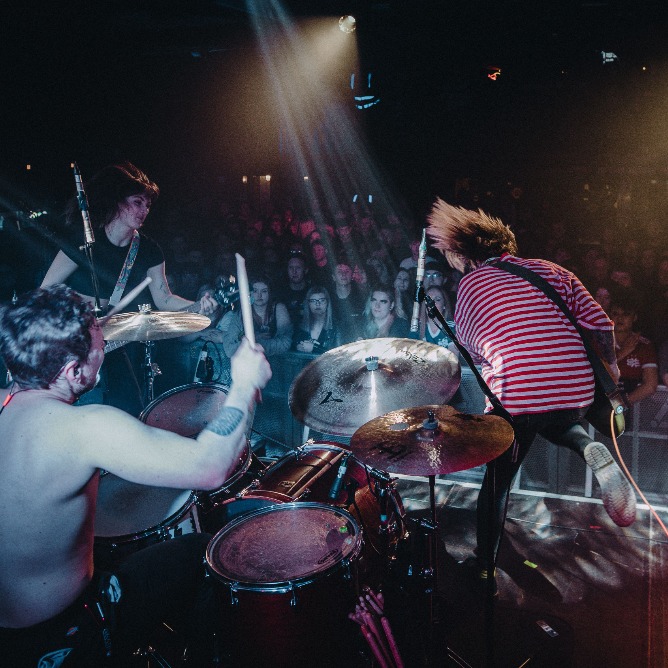 snake eyes’ distinguishable sound is supercharged, having already mastered the fiery choruses, grungy riffs and catchy hollering britpop sensibilities. aptly coined by the band as ‘grit pop’. alongside mostly upbeat music, heffy’s lyrics hold the meaning of being kind and the freedom to express yourself no matter who you are. the visuals created by the band’s own thomas coe-brooker, accompany the music with a story - always pleasing aesthetically with their scrappy, colourful, nostalgic style - think wolf alice, nirvana, blur and pixies. snake eyes has noticeably ramped up their skill as a band in a very short space of time since launching in 2020, with the maturity of the songwriting and performance evident. jim, nicole and brooker came out of lockdown hungry to slog away at as many live shows as they could - so far including a music venue trust and national lottery revive live co-headline tour with james and the cold gun. plus, a host of support runs for gender roles, delta sleep, sick joy, bad nerves and u.k. album chart toppers don broco - on top of this selling out their headline record release show in brighton in november 2021. now with the return of some normality (hopefully), snake eyes’ main goal is to build and forge a bond with like-minded people that find comfort and joy in their songs. we have only just scratched the surface with what the brighton trio are capable of and they are looking to grow their reputation as a phenomenal live act to match the energy of their records and spread the word of grit pop everywhere.

"dark, grungy energy ripping through chugging guitars, biting solos and distorted vocals, they have it all wrapped up in a spiky package"